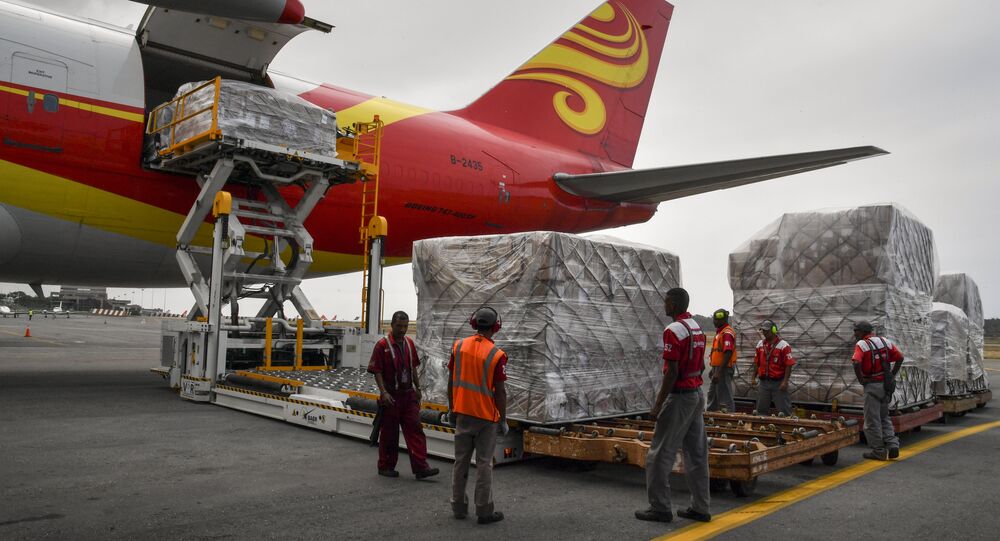 Last week, Venezuelan authorities confirmed receiving 65 tonnes of medicines from China, with Caracas noting the "important and strategic level" of the partnership with Beijing.

"I don't know where do you get this information. I can definitely say it is fiction," the Chinese Foreign Ministry spokesman, Geng Shuang, said at a briefing.

According to the diplomat, Beijing's stance on the Venezuelan crisis is clear, with China insisting that the issue should be solved in strict accordance with international law.

"The Chinese government is against interference in the internal affairs of Venezuela and believes that the authorities and the opposition of this country should work out a draft political settlement through dialogue," Gen Shuang added.

© AFP 2021 / YURI CORTEZ
Lavrov on Russian Military in Venezuela: Moscow is Not Trying to Create 'Second Syria'
The statement follows media reports about the alleged arrival of a small group of the Chinese military to Venezuela. According to media speculations, the military personnel might have arrived in Venezuela in order to help distribute Chinese humanitarian aid.

On Friday, Venezuelan Vice President Tareck El Aissami that Caracas had received 65 tonnes of medicines from China. The vice president also noted the "important and strategic level" of the partnership between Caracas and Beijing.

Over the past several weeks, Washington and some of its allies have been voicing concern over the arrival of Russian military specialists to Venezuela, with US authorities threatening to impose sanctions on Moscow should Russian servicemen stay in the Latin American country. Moscow, in turn, stated that Russian military specialists had arrived in the country in the framework of bilateral defence contracts, emphasising that their presence in the country is fully in line with international law.

While Washington and most of European and Latin American states immediately backed Venezuelan opposition leader Juan Guaido, who named himself "interim president" in January, Moscow and Beijing haven't recognised the self-proclaimed leader and voiced their support for the legitimate government under Maduro.