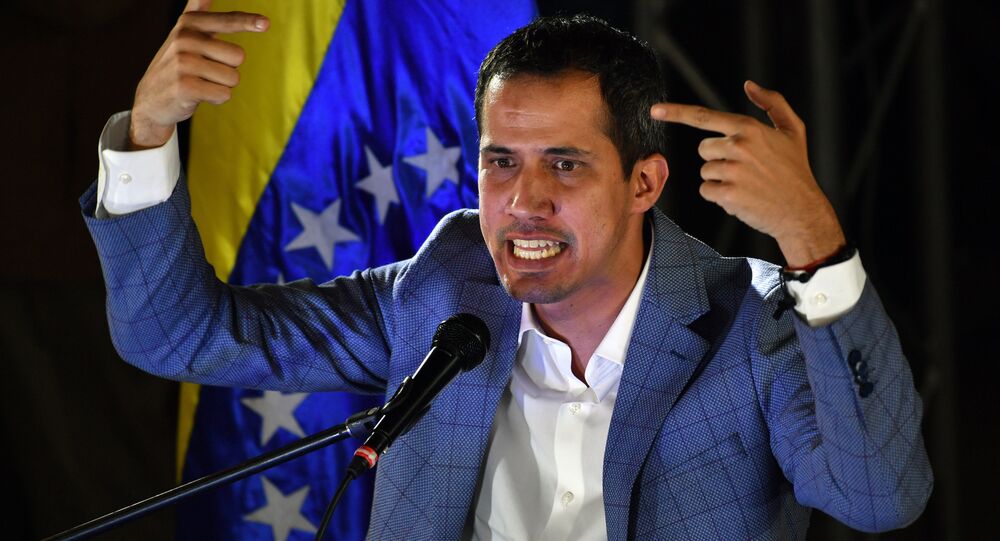 The self-proclaimed leader has started a trip across Venezuela in an attempt to create “freedom cells” in order to oust President Nicolas Maduro from office.

Venezuela's self-proclaimed interim leader Juan Guaido has called on people of Venezuela to get out on the streets, mobilize and organize into what he dubbed "Operation Freedom."

"After we mobilize the entire country, we will go to Miraflores and reclaim what belongs to the people," Guaido told supporters, referring to the presidential palace, as he announced the ‘operation' in the city of Valencia Saturday, AFP report says.

© AFP 2020 / Juan Barreto
Guaido Claims Has Control Over Venezuela's US-Based PDVSA Subsidiary
Starting Saturday, Guaido is touring Venezuela accompanied by opposition lawmakers, tasked with the creation of ‘freedom cells' — organized civilian opposition groups. The opposition announced that it has already set up 50 cells in half of Venezuela's 23 states.

"Whatever happens, we must be united, mobilized in the streets," Guaido said.

According to Guaido's tweet, Operation Freedom consists of three steps: to create "Freedom and aid" committees "on every street of Venezuela;" to create "labor and sectoral committees" in the public and private sectors and begin preparation of "constitutional forces" within National Armed Forces.

​"For the international community to do more and the Armed Forces do what they must, we have to move on to a level of organization, pressure and mobilization never seen before," Guaido tweeted. According to his tweets, the National Bolivarian Armed Forces of Venezuela are "in total disobedience" and are willing to "organize to protect the people of Venezuela."

​"I am certain that our officials will have the necessary moral reserve to decisively cease the usurpation," the tweet reads.

Until now, Guaido sought to mobilize people in the nation's capital of Caracas, which suffered a lengthy blackout that officials say was the result of sabotage. Now that power and basic services in the capital have been restored, Guaido has shifted his focus to the rest of the country which is still struggling with power outages and service disruptions, according to Reuters.

Earlier this week, the country's chief prosecutor asked the Supreme Court to probe Guaido for alleged involvement in the ‘sabotage' of the country's electricity system, Reuters.

© REUTERS / Miraflores Palace
Maduro Announces New Venezuela Military Drills After Week-Long Blackout (PHOTOS)
Speaking to supporters in Valencia, Guaido said he is mulling asking the National Assembly to activate a constitutional clause that would allow foreign military intervention, adding that such a move would "depend on others."

Currently, Guaido's greatest challenge appears to be Venezuela's military, which, despite his tweets, remains loyal to Maduro. A military intervention might be one way to overcome this obstacle. The administration of US President Donald Trump has not ruled out invading Venezuela, with US National Security Adviser John Bolton saying that "all options are on the table." However, there is no sign of such an operation building in the US, an AFP report says.

Washington continues to impose sanctions on Caracas and Maduro, making a troubled situation in the crisis-ridden country even worse for its leaders and its people. On 28 April, a US embargo on Venezuelan oil exports will go into effect, dealing a heavy blow to the already-diminished finances of Caracas,

According to recent statistics, the US accounts for an estimated 50 percent of the oil exported from the beleaguered South American nation.