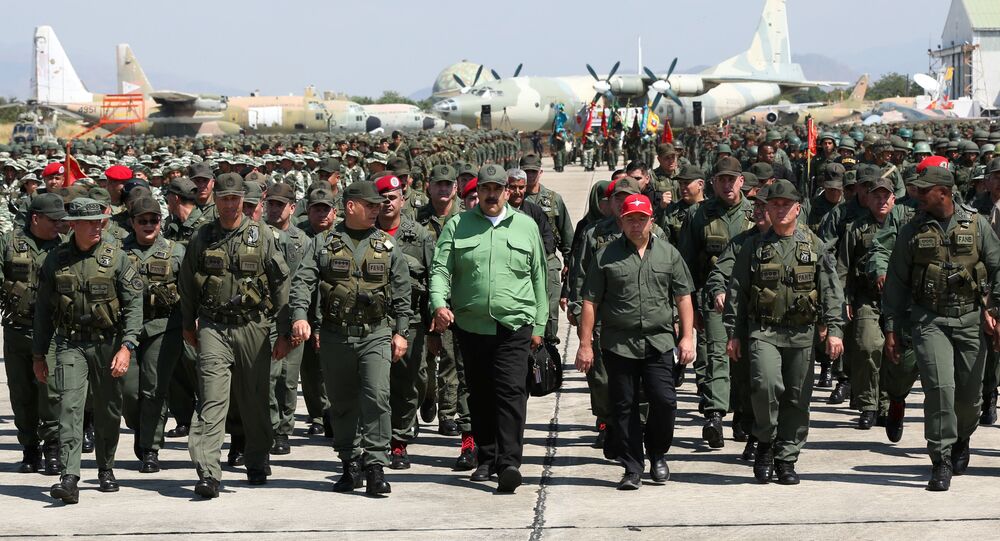 “The complex military exercises dubbed Ana Karina Rote have started to protect the strategic services of the country. We will not allow the enemies of the motherland to steal the peace of the heroic Venezuelan people again”, Maduro wrote on Twitter.

The first stage of the drills, dubbed Angostura, was held in mid-February. This time, the drills are dedicated to the protection of the national electric power grid following the major blackout that swept the country last week.

READ MORE: US Envoy Admits Venezuela's Guaido 'Not in Power'

On Friday, Maduro also announced the creation of a new structure within the armed forces tasked with protecting key national infrastructure.

© REUTERS / Larry Downing
US Diplomats From Venezuela to Continue Mission in DC, Other Locations - Envoy
On 7 March, a massive power outage swept through the majority of Venezuelan states, leaving the nation — over 30 million people — without access to basic amenities, including water and medical care at hospitals. National electricity supplier Corpoelec insisted that the blackout was the result of sabotage at the major Guri hydroelectric power plant in the country's east.

Maduro has pinned the blame for the crisis on the United States, while Washington has denied having a role in the blackout. The power supply was fully restored across Venezuela on Wednesday, according to Communications Minister Jorge Rodriguez.

© REUTERS / Miraflores Palace
'I Am a Soldier, Just Like You': Maduro Stresses Army's Readiness for Drills (VIDEO)
The crisis in Venezuela escalated in January when lawmaker Juan Guaido was elected president of the opposition-controlled National Assembly, which all other government branches have been refusing to recognize since 2016. Guaido then declared himself the country's "interim president", gaining almost immediate support from the United States and its allies. Russia, China and numerous others have reaffirmed their support for constitutionally elected Nicolas Maduro as Venezuela's only legitimate president.

President Nicolas Maduro, who was sworn in for his second presidential term on 10 January after winning the May election, has called Guaido's move an attempt to stage a coup orchestrated by Washington.