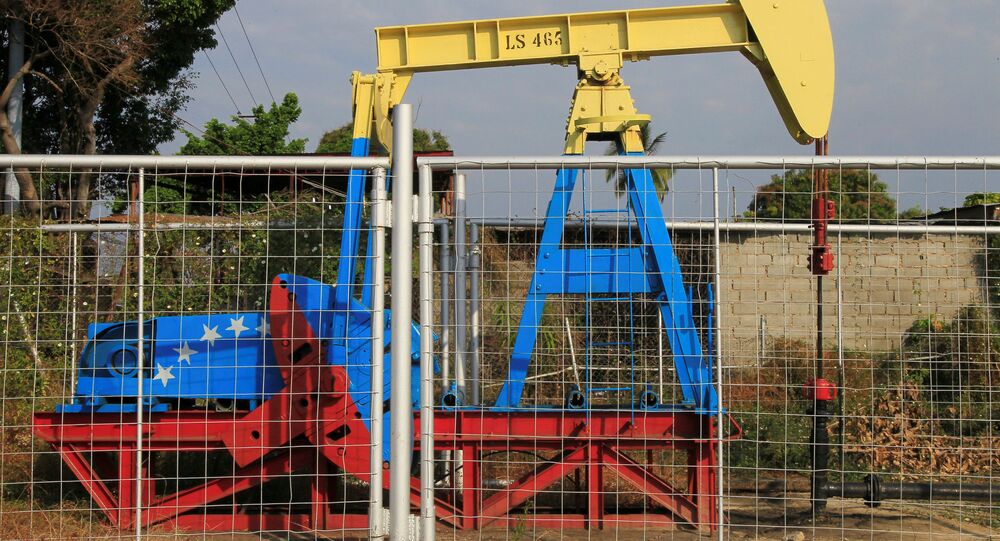 HOUSTON (Sputnik) — The current situation in Venezuelan is not a shock for the global energy market, and will not affect the world’s economy, Petrobras CEO Roberto Castello Branco told Sputnik on the sidelines of the CERAWeek conference on Tuesday.

“While Venezuela is decreasing its production continuously, it’s not a shock [to the world energy market]. Others are increasing production. Ourselves, we’ll be increasing production”, Branco said. "So, I think it will not cause any impact on the global economy". Branco expressed hope Venezuela will succeed in freeing itself from the current situation, which he characterized as “very damaging for the Venezuelan people".

© AFP 2021 / Juan Barreto
Journo: Reason for Aggression Against Venezuela Is to Knock It Out of Oil Market
Venezuelan President Nicolas Maduro said US sanctions against his country were tantamount to an illegal seizure of Venezuela’s sovereign assets.

The political crisis in Venezuela escalated in late January, when opposition leader Juan Guaido declared himself to be the country's interim president. The United States and 54 countries have recognized Guaido, but Russia, China, Bolivia, Turkey and a number of other countries have voiced their support for constitutionally elected Maduro and his government as Venezuela’s only legitimate authority.

Maduro was sworn in for his second presidential term in January after winning the May 2018 elections. He has dubbed Guaido as a puppet of the United States and accused Washington of attempting to stage a coup d’etat in Venezuela to exact a change in government and claim the country’s resources.

OPEC Has No Impact on Oil Price Trend

Meanwhile, Branco also told Sputnik on the sidelines of the CERAWeek conference on Tuesday that the Organization of the Petroleum Exporting Countries (OPEC) has no impact on the trend of global oil price.

"I think that OPEC is a group, an important producer of oil, and has continued to be that over many years", Branco said. "But, frankly, I don’t think that OPEC has any impact on the trend of oil price".

On 7 December, participants of the OPEC-non-OPEC 2017 oil output reduction deal agreed to reduce overall production by 1.2 million barrels per day starting in 2019, with a view of signing a charter on future long-term cooperation in the first quarter of 2019.

© AP Photo / Jin Liangkuai
US Wants to Crack Down on China’s Oil Interests Through Venezuela - Prof
Petrobras CEO also told Sputnik that Petrobras is now only concentrated on undertaking domestic projects. "For the time being we are focused only on Brazil", Branco said. "Petrobras in the past went internationally, but the results were not so good so we decided to retrench to strengthen our position in the domestic market of Brazil".

Branco said Petrobras will probably design plans to conduct work globally in the future, but reiterated that at present the company is only interested in domestic projects in Brazil. In addition, Branco noted that Petrobras is set to increase production this year.