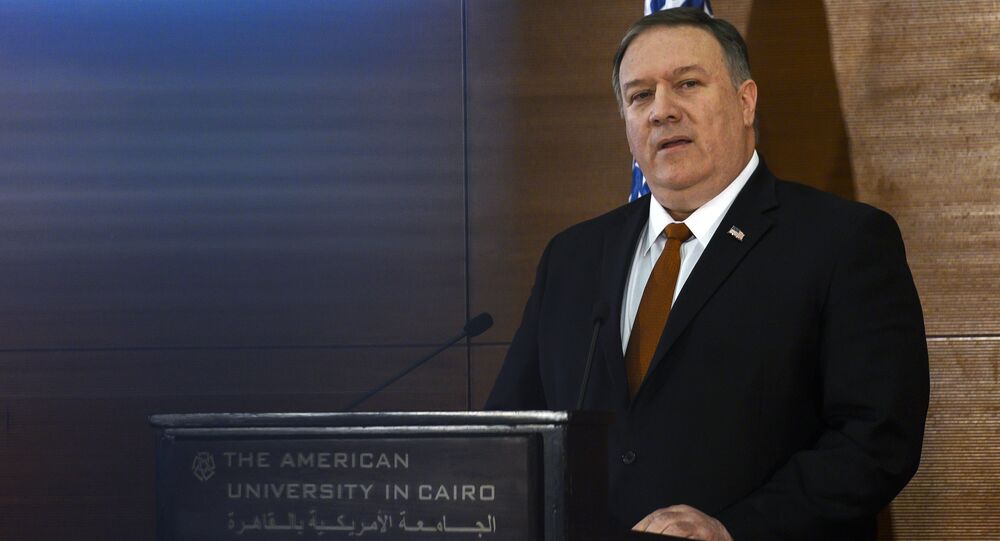 US Secretary of State Mike Pompeo said Monday that the "presence of the US diplomatic staff" at the US Embassy in Venezuela "has become a constraint on US policy".

According to Pompeo, the decision to recall the remaining US diplomats reflects the "deteriorating situation" in the crisis-torn country.

The U.S. will withdraw all remaining personnel from @usembassyve this week. This decision reflects the deteriorating situation in #Venezuela as well as the conclusion that the presence of U.S. diplomatic staff at the embassy has become a constraint on U.S. policy.

The US Agency for International Development (USAID) sent to Colombia last week additional humanitarian aid for Venezuela. According to the USAID, the supplies were transported by a US military C-130 cargo plane and include items such as emergency medical kits, medical supplies, and hygiene and food kits.

In late February, the Venezuelan opposition tried to force US-sponsored aid into the country through the borders with Colombia and Brazil. The failed attempt sparked clashes between Venezuelan officers, who prevented trucks from crossing without permission, and pro-aid protesters.

© AP Photo / Andrew Harnik, Pool
US Secretary of State Blames Cuba, Russia For Venezuela Crisis
Maduro has said Caracas would not accept the US aid and has characterized Washington’s attempts to deliver alleged supplies to Venezuela as a violation of the country’s sovereignty. Maduro has accused opposition leader Juan Guaido of conspiring with the United States to overthrow the country’s legitimate government including by organizing the delivery of so-called humanitarian aid as part of a plan to justify US military intervention.

US Special Envoy for Venezuela Eliot Abrams told reporters during a briefing last Friday that Washington would not utilize military force in order to deliver humanitarian supplies to Venezuela.

READ MORE: Ex-UN Rapporteur to Venezuela Fears That 'Maduro Might Be Assassinated'

Meanwhile, Venezuelan Ambassador to the UN Samuel Moncada has said that Washington was arming Venezuelan defectors to form a so-called liberation army to invade the country. The envoy has stressed that the United States was inflating figures that there are thousands of Venezuelan deserters because they are fabricating their own army similar to the US-backed Contra armies fighting against the Sandinista government in the Nicaragua Revolution in the 1980s.

© AFP 2021 / Yuri CORTEZ
Venezuela: ‘Democratic Legitimacy Can’t be Built by Coercion From Outside’ - Prof
Moreover, the UN envoy has said Caracas views Trump's stance of "all options on the table" as a threat of using military force to overthrow President Nicolas Maduro's government.

Tensions in Venezuela escalated in January when US-backed opposition leader Guaido declared himself to be the country’s interim president. The United States immediately recognized Guaido, seized billions of dollars’ worth of the Venezuela’s assets and threatened to use military action against incumbent President Nicolas Maduro's government.

Maduro has called Guaido a puppet of the United States and accused Washington of attempting to orchestrate a coup to overthrow Venezuela’s legitimate government.

Russia, China, Turkey, Mexico, Bolivia, Iran, Turkey and a number of other countries have reaffirmed their support for constitutionally elected Maduro as Venezuela’s only legitimate president. The United Nations also recognizes the Maduro government as Venezuela’s legitimate authority.