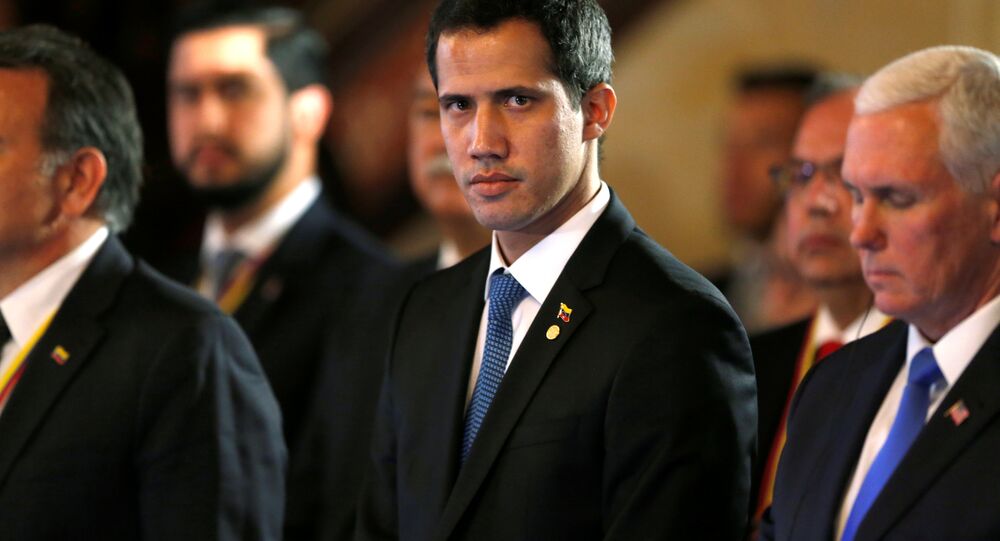 The self-proclaimed interim president of Venezuela Juan Guaido crossed into Colombia in late February in defiance of a Venezuelan Supreme Court order barring him from leaving the country due to an ongoing investigation.

Venezuelan President Nicolas Maduro said earlier this week that Guaido must face trial after his return for breaking the travel ban.

According to Reuters, Guaido visited Paraguay and Argentina on Friday to shore up Latin American support for a transition government for the crisis-torn country. Guaido said Saturday, cited by Reuters, he would return to Venezuela from Ecuador, where he is meeting with the country's president Lenin Moreno. Guaido also said that he was calling for new protests next week in Venezuela. However, the opposition leader did not specify the particular timeline of his return, according to Reuters.

US Special Representative for Venezuela Elliott Abrams told reporters during a press briefing on Friday that Washington is concerned about Guaido's ability to return to the country and warns about a major international reaction in case of the self-proclaimed president’s arrest.

© AP Photo / Manuel Balce Ceneta
US Not Planning Military Intervention in Venezuela, Yet All Options on Table - US Special Representative for Venezuela
Similarly, EU foreign policy chief Federica Mogherini warned on Saturday that any possible measure that could put at risk Venezuelan opposition leader Juan Guaido’s freedom and safety would lead to a new escalation of crisis around the Latin American country and face a strong international condemnation.

After unsuccessful attempts to deliver US-sponsored humanitarian aid to Venezuela from the neighboring country, Guaido said that he plans to return home. According to the deputy judge of the Venezuelan Supreme Tribunal of Justice, Juan Carlos Valdez, Guaido could face up to 30 years in jail for breaching foreign travel ban.

The situation in crisis-torn Venezuela escalated on 23 January when the opposition leader, Juan Guaido, declared himself interim president, disputing last year's reelection of Maduro. Guaido was almost immediately recognized by the United States and some other countries. Russia, China, Mexico, Iran, Turkey among other nations, voiced support for constitutionally elected Maduro, who, in turn, accused Washington of orchestrating a coup.