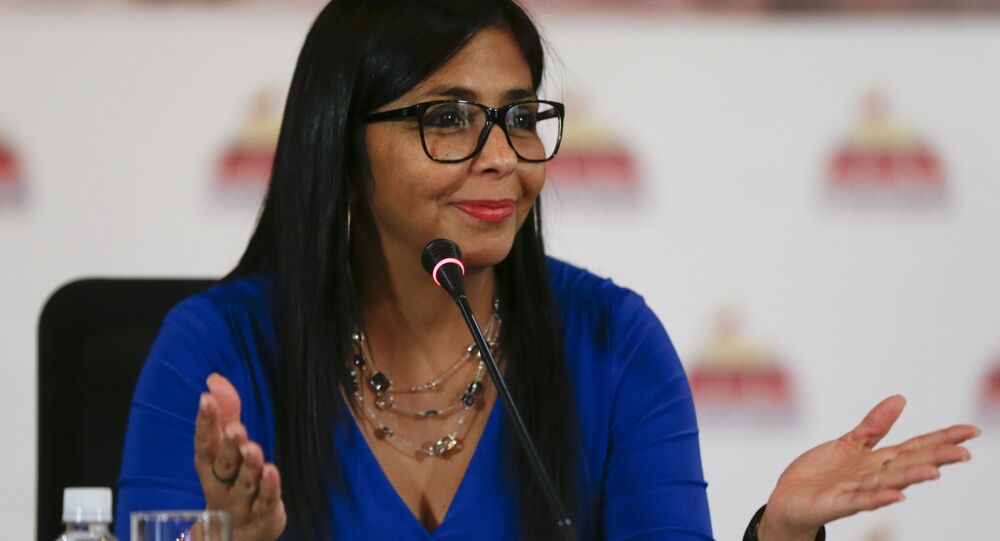 In February, the Venezuelan opposition tried to forcefully bring US-sponsored aid into Venezuela from Brazil and Colombia. The failed attempt resulted in clashes between the Venezuelan National Guard officers and pro-aid protesters.

"Today Venezuela goes through a special period when Venezuela is a victim of multilateral aggression from the United States. But we see here an opportunity to find new ways of cooperation taking into account a current political situation," Rodriguez said ahead of the talks with Russian Foreign Minister Sergei Lavrov.

She noted that Venezuela is proposing a new agenda aimed at consolidating Venezuela-Russia ties and developing relations between Caracas and Moscow.

"I would like to stress that President Putin sends words of support and solidarity to his counterpart Nicolas Maduro," Lavrov said, noting that Russian-Venezuelan cooperation was especially important now that Venezuela was suffering unhindered interference in its internal affairs.

The minister added that Moscow supported the steps taken by Maduro's government to stabilize social and economic situation in Venezuela.

On January 5, lawmaker Juan Guaido was elected the head of the opposition-controlled National Assembly.

© AP Photo / Frank Franklin II
UNSC ‘Very Unlikely’ to Agree on US, Russia Resolutions on Venezuela – UK Envoy
On January 23, two days after the Venezuelan Supreme Court annulled his election, Guaido declared himself the country's "interim president." Venezuelan President Nicolas Maduro, who was sworn in for his second presidential term on January 10 after winning the May election, which part of the opposition boycotted, qualified Guaido's move as an attempt to stage a coup orchestrated by Washington.

The United States immediately recognised Guaido, after which some 50 other countries, including Colombia, followed suit. Russia, China, Cuba, Bolivia and a number of other states have, in the meantime, voiced their support for the legitimate government of Maduro.