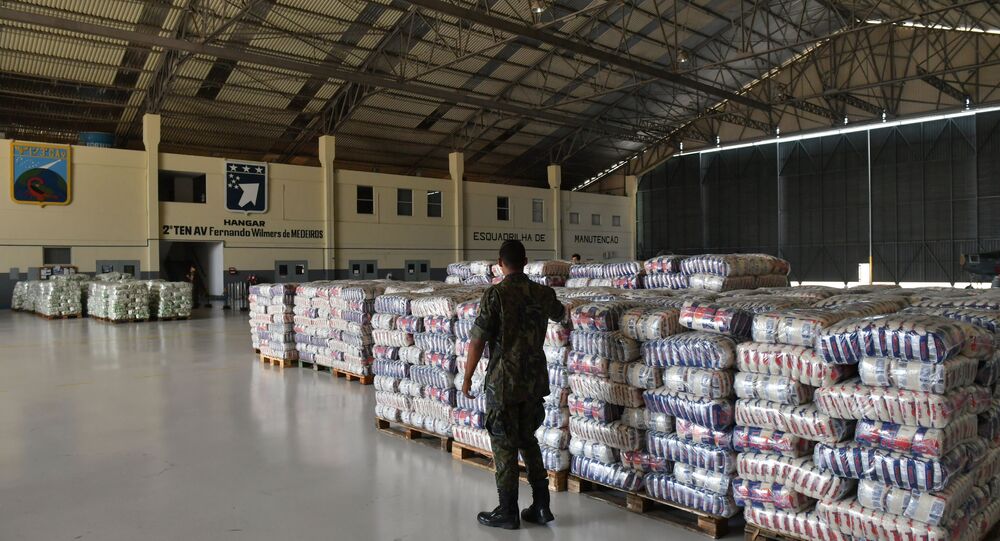 BRUSSELS (Sputnik) - Caracas insists that the possible humanitarian assistance to Venezuela from the European Union must be delivered and distributed exclusively through the United Nations system in order to avoid any politicization of the issue, Venezuela's ambassador to Brussels, Claudia Salerno Caldera, told Sputnik in an interview.

"On Thursday, February 28, they [EU representatives to International Contact Group on Venezuela, who visited the country last week] will have a meeting at a high technical level, in particular, in order to consider concrete requests for the total amount of $2 billion in order to assess what volume of aid they are ready to provide and via which channels to deliver it", the envoy said, adding that Caracas wanted to the aid to be delivered through the United Nations system to avoid any politicization of the issue.

Last week, Venezuelan President Nicolas Maduro announced that Caracas agreed to accept over $2.3 billion worth of funding in technical humanitarian aid from the European Union.

At the same time, the president has categorically refused to authorize the deliveries of aid sponsored by the United States, which has been one of the most ardent supporters of Venezuelan opposition leader and self-proclaimed acting president Juan Guaido, as he describes the so-called aid as a ploy to oust him from power and a "show" aimed at justifying an intervention into Venezuela.

© REUTERS / Carlos Eduardo Ramirez/File Photo
Situation on Venezuelan-Colombian Border Amid US Humanitarian Aid Delivery
On 23 February, the Venezuelan opposition tried to forcefully bring the US-sponsored aid into Venezuela from Brazil and Colombia. The failed attempt resulted in clashes between the Venezuelan National Guard officers, who prevented trucks with aid from crossing the country's border without permission, and pro-aid protesters, who tried to help force the aid into Venezuela.

© AP Photo / Seth Wenig
Weapons for Opposition May Be Purchased in Eastern Europe – Venezuela's FM
Maduro has repeatedly accused Washington of trying to orchestrate a coup ever since US-backed Venezuelan opposition leader Juan Guaido declared himself interim president last month. Within days of Guaido’s pronouncement, the United States seized billions of dollars' worth of Venezuela’s oil assets while several US officials threatened to take military action against Maduro’s government.

Russia, China, Cuba, Bolivia, Iran, Turkey and a number of other states have reaffirmed their support for constitutionally elected Maduro as Venezuela’s only legitimate president. In addition, the United Nations also still recognizes the Maduro government.