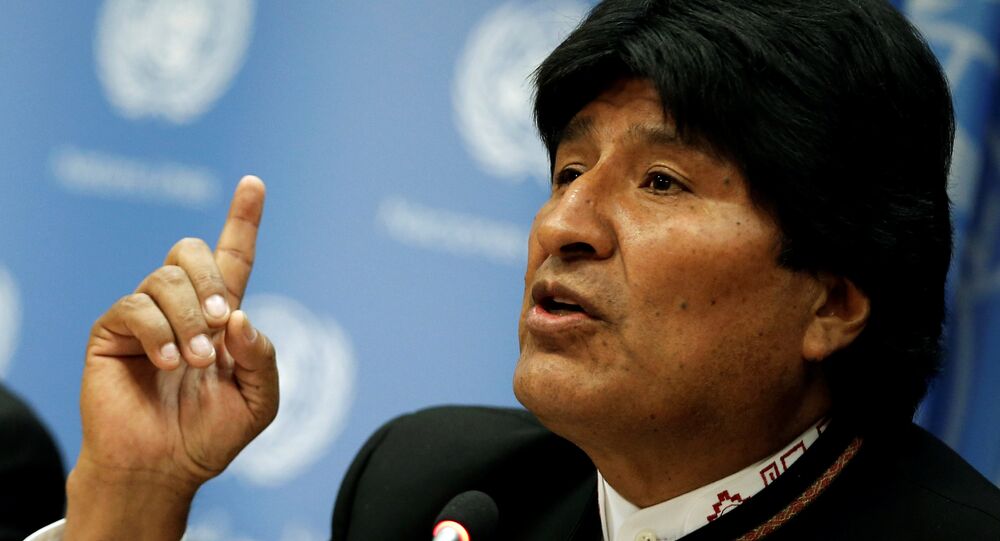 'If Something Happens With Maduro, It's on US': Bolivian President Warns

The representatives of Lima Group countries are meeting in Bogota to discuss the current situation in Venezuela. Most of the organization's member countries are backing opposition leader Guaido. US Vice President Mike Pence has also arrived in Bogota to attend the talks.

President Nicolas Maduro has addressed the political and financial crisis in the country on Monday, stressing that the Venezuelan government will independently deal with the problems that the country is currently facing.

"The empire of evil [the United States] and its servants should know that [the principle of] self-determination reigns in Venezuela. We will resolve the problems in the national union together with the Bolivarian government, which I am heading," Maduro wrote on Twitter.

A threat to Maduro's Life

Earlier in the day, Bolivian President Evo Morales warned that there was a threat to Venezuelan President Nicolas Maduro's life and pointed out that the United States would be responsible for a possible assassination of Maduro. According to the Bolivian leader, the only US goal is to seize Venezuelan natural resources.

"What does [US Secretary of State Mike] Pompeo say now after their [the United States and its allies] failure? He says that Maduro's days are numbered. Last night a US senator said that Maduro must be assassinated. If something happens with Maduro, the United States, Pompeo and this senator Rubio will be responsible for that," Morales said, as quoted by the ABI news agency.

The statement followed Sunday's tweets by US Senator Marco Rubio about the situation in Venezuela. Among this posts, Rubio uploaded a photo of former Libyan leader Muammar Gaddafi taken by rebels, who killed him soon after this photo was made.

In the meantime, Mexican President Andres Manuel Lopez Obrador reiterated Mexico's stance on the situation in Venezuela, stressing that a peaceful solution to the crisis in the Bolivarian republic should be found through negotiations.

"It is clear to us that a peaceful solution should be found for Venezuela by means of negotiations. We advocate what is determined by the constitution — non-interference and self-determination of peoples," the president said at a news conference in Mexico.

Obrador has repeatedly stated that Mexico's approach toward the situation in the Bolivarian Republic is based on non-interference and respect for international law. This position is almost unique among the Latin American and Caribbean nations, the majority of which have expressed support for the anti-government opposition in Venezuela.

In early February, Mexico, Uruguay and the Caribbean Community (CARICOM) proposed the so-called Montevideo mechanism aimed at facilitating the peace process in Venezuela. The mechanism envisaged four stages: the immediate launch of a dialogue on the situation in Venezuela, the negotiation process, the drafting of an agreement and its implementation.

Colombia Calls on Other Countries to Join Lima Group

At the same time, Colombian Foreign Minister Carlos Holmes Trujillo called on the international community to join the Lima Group on the situation in Venezuela.

"It is important to invite more and more members of the international community, those who will participate with us in the expanded dialogue, so that they will join the actions that are made by us as the Lima Group and will support Venezuelans’ efforts aimed at restoring democracy and hope," the foreign minister said.

This past month has seen Venezuela going through a political crisis. It started on January 5, when Juan Guaido was elected as president of the Venezuelan unicameral legislature, the opposition-run National Assembly, whose authority has not been recognized by any other branch of power since 2016. On January 23, shortly after the Venezuelan Supreme Court annulled Guaido's election as the National Assembly's head, the opposition leader proclaimed himself acting Venezuelan president.

President Nicolas Maduro, whose new presidential term, disputed by the opposition that boycotted the election, began on January 10, viewed Guaido'sprovocative actions as an attempted coup and blamed the United States for preparing it.