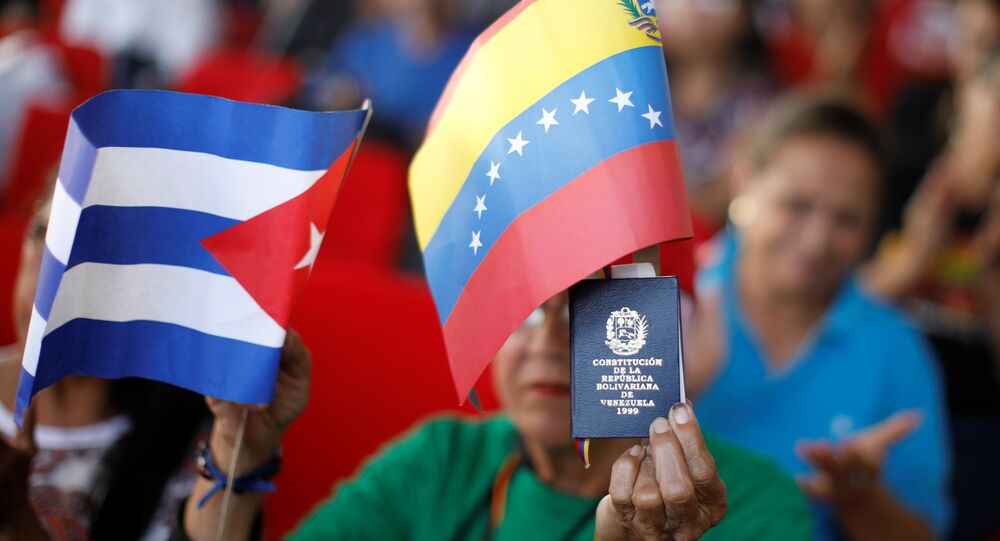 US Vice President Mike Pence is currently attending talks of the regional Lima Group of states in Bogota. At the meeting, he promised more sanctions to follow:

"In the days ahead, the United States will announce even stronger sanctions on the regime's corrupt financial networks," Pence said at a Lima Group meeting, calling on all Lima Group members to freeze the assets of Venezuela's oil giant PDVSA and restrict visas for Venezuelan officials.

The new punitive measures were issued just hours after Venezuelan Foreign Minister Jorge Arreaza blamed the current political and economic problems that Caracas is facing on the US financial blockade and warfare.

© AFP 2021 / Yuri CORTEZ
Rallies in Caracas: Carnival With Mandarins, Beach-Going Opposition
Washington has already imposed numerous sanctions on Venezuela and has also seized the country's assets. In January, Washington blocked around $7 billion in assets belonging to Venezuela's state oil firm PDVSA and began transferring control over them to the president of the opposition-controlled National Assembly, Juan Guaido.

Prior to this, Guaido declared himself the country's "interim president" and the United States immediately recognised him as such. About 50 other countries have followed their example, while Russia, China, Cuba, Bolivia and a number of other states have voiced their support for the legitimate government of Maduro.

Maduro qualified Guaido's move as an attempt to stage a coup. In one of his latest statements, Maduro stressed that he was not going to back down, saying that he "is governing Venezuela and will continue governing it".

In the meantime, the situation in the country remains explosive amid clashes between police and protesters on Venezuela's borders with Colombia and Brazil, which prompted Caracas to announce that they would close the border with Brazil and three bridges connecting Colombia and Venezuela, as well as to shut the border with neighbouring island nations and suspend air traffic.