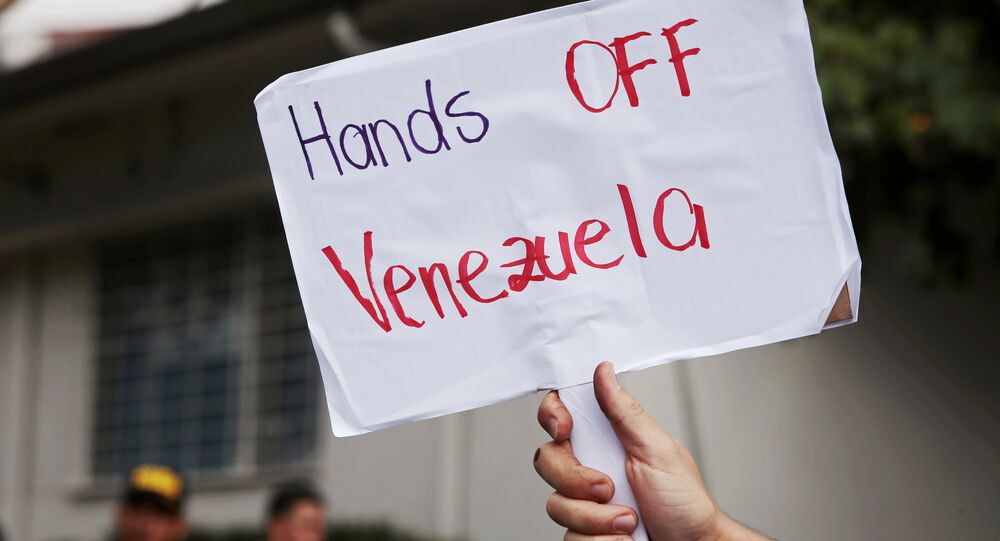 WASHINGTON (Sputnik) - The US blockade against Venezuela is causing the suffering of the Venezuelan people and must be ended, Venezuelan Foreign Minister Jorge Arreaza said during an interview in New York City on Monday.

"The main reason why our economy has trouble is because of international attack and specifically this blockade and sanctions from the US," Arreaza told Democracy Now. "This blockade is being translated into the suffering of many Venezuelans and this has to be stopped."

Arreaza emphasized that the US blockade remains the main cause of the country's economic crisis.

"We have an economic crisis. Has there been mismanagement? Maybe. We are not a perfect government, and it's very difficult to know what decisions to take when your economy is under aggression, when there is economic warfare against your economy," he said.

The foreign minister said that were it not for the US sanctions and blockade, the country's leaders would be able to manage the economy.

"If we had the $30 billion that this blockade has cost over one year and a half and $15 billion that our companies Citgo represents in the value of the assets, things would be very different," he said.

© AFP 2021 / Raul Arboleda
South Korea Recognises Guaido as Interim President of Venezuela
At the same time, the Venezuelan top diplomat noted that Caracas is already selling its oil that was meant for sale in the United States to other countries following Washington's sanctions.

"We already have new contracts with some other countries," Arreaza told Democracy Now. "I am not going to name them, because then Mr. Bolton threatens them. Immediately when he knew that we had some negotiations with one of the Asian countries, he threatened that country. And he said that they wouldn't be forgotten. So I have to be careful here, but we are already selling our oil that meant to come to the US, it's being sold to other countries in the world."

The United States has imposed numerous rounds of sanctions on Venezuela and has also seized the country's assets. In January, Washington blocked around $7 billion in assets belonging to Venezuela's state oil firm PDVSA and began transferring control over them to the president of the opposition-controlled National Assembly Juan Guaido.

Guaido declared himself the country's "interim president" on January 23. The United States immediately recognized Guaido, after which 50 other countries, including Germany, followed suit. Russia, China, Cuba, Bolivia and a number of other states have, in the meantime, voiced their support the legitimate government of Maduro.

Venezuelan President Nicolas Maduro qualified Guaido's move as an attempt to stage a coup that Washington had orchestrated. Maduro was sworn in for his second presidential term on January 10 after winning the May election, which part of the opposition boycotted.