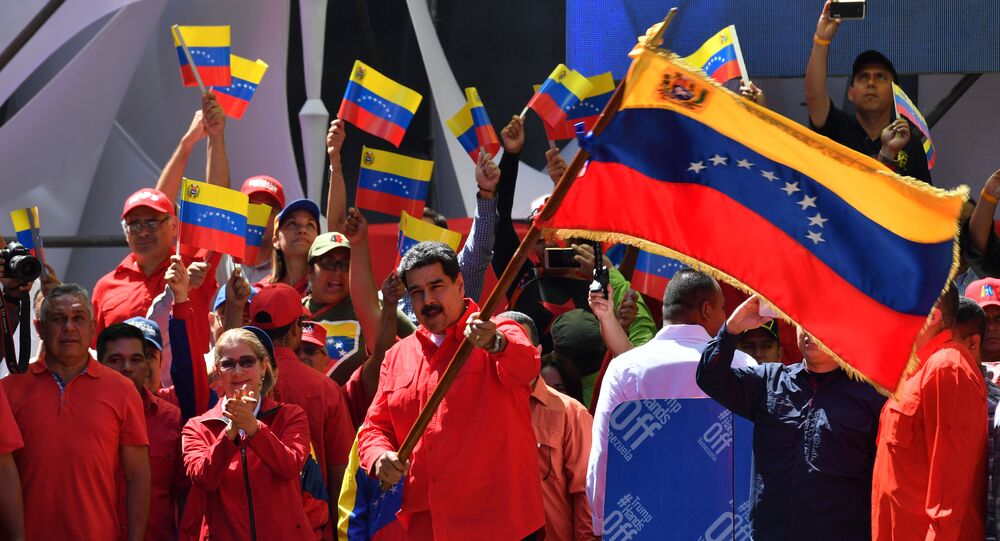 CARACAS (Sputnik) – Several central streets of Caracas turned red on 23 February as supporters of Venezuelan President Nicolas Maduro gathered for a rally in support of the legitimate president.

At the same time, opposition activists in white T-shirts gathered in front of La Carlota Air Base, which is five minutes away from the centre of the capital.

A Sputnik correspondent personally witnessed both rallies and tried to understand their similarities and differences.

© AP Photo / Eraldo Peres
Brazilian Military Widens Security Cordon on Venezuelan Border to Lower Tensions
While waiting for their leader, people in red were having as much fun as they could. The atmosphere of unity and celebration prevailed in the crowd. Several people with musical instruments were playing salsa for those who wanted to dance.

Any interested person could join the rally. It was enough just to pass through the National Guard cordon, a formal search for weapons, and, if everything was in order, everyone was welcome to join the "festival".

Several people with shopping carts filled with mandarins were standing right next to the cordon giving out free snacks.

When the minister for social affairs joined the crowd, his appearance was met with delight, and the crowd was chanting: "Long live the Chavez revolution, long live Venezuela"!

The president’s speech began after people had waited for about an hour on open air. Maduro announced the severance of diplomatic relations with Colombia and assured his supporters that Venezuela could not be defeated. Before finishing his speech, the president danced salsa with his wife, and the atmosphere started to increasingly look like a carnival.

By this time, the "red T-shirts" had already filled not only the central square, but also the neighbouring streets. At least 15,000 people in total gathered for the rally.

"We are here to express support for our president and the revolution. Everyone should see that we are the majority and we are just cheerful people", one of the rally participants said, sharing his mood with the Sputnik correspondent.

© REUTERS / Marco Bello
WATCH Molotov Cocktails Thrown at US Aid Truck on Venezuelan Border
A different atmosphere prevailed at another rally not far from the "Maduro’s carnival", in front of La Carlota Air Base. Several thousand people in white t-shirts holding flags with seven stars gathered there.

Participants of this rally did not seem to have a common plan of action. Several dozen demonstrators stood at the gates of the base, chanting "Freedom for Venezuela"! while people in superhero costumes were walking around. At another entrance to the base, a demonstrator with a US flag was discussing something with a like-minded person, who was wrapped in a Venezuelan flag, which was a very vivid illustration of what was happening.

Everyone to the Beach

"We ourselves do not fully understand the plan of action. No official statements were made. We do not know what comes next", one of the opposition members at the air base fence, Jose Alvarado, said.

© REUTERS / Marco Bello
Possibility of Military Intervention in Venezuela Rising Every Day - Analyst
After about 30 minutes the demonstrators began dispersing among the neighbouring streets, some of them went to cafes. There were almost no police or armed forces at the site. It seemed like the authorities believed that nothing serious would happen during this rally.

It was actually true and there was almost no one left at the air base later this afternoon.

"We need to go home before the night, because then it is unsafe and you could run into bandits. And tomorrow we will go to the beach, this is the weekend after all", one of the protesters in a cafe said, sharing his plans and adding that he was hoping to take a break from the exhausting event.

Saturday, 23 February, caused anxiety among the majority of Venezuelans, as people assumed that this day could become a turning point for their country with erupting riots and clashes between supporters and opponents of the authorities. However, the mood of the opposition was not bellicose, and the option to go to the beach on Sunday suited everyone more than the prospect of baking in the sun at rallies in Caracas.