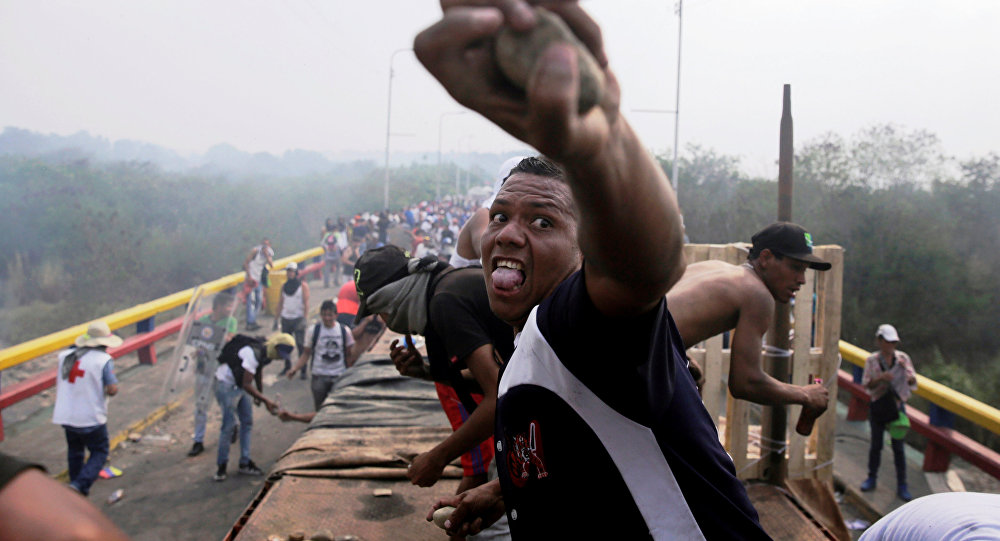 Attempts to bring unauthorised aid into Venezuela on 23 February led to clashes between Venezuelan police, trying to prevent aid-filled trucks from crossing the country’s border without permission and protesters, subsequently prompting Caracas to sever diplomatic relations with neighbouring Colombia.

On 23 February, a truck with US aid caught fire during a failed attempt by alleged opposition protesters to cross the closed Colombia-Venezuela border on the Francisco de Paula Santander Bridge.

According to American journalist Max Blumenthal, a video of the incident "appears to show the moment when an opposition guarimbero throws a Molotov cocktail on a truck loaded with US aid".

The original author of the post, Humberto Ortiz has responded to the journalist, explaining the details of the incident.

"I have seen again the images of the Noticias Uno [news agency] and taking into account the location of the trucks I have no doubts, they were set on fire by the protesters from the Colombian side", Humberto Ortiz wrote in response to Blumental's post.

© AP Photo / Dieu Nalio Chery
Venezuelan Police Detained Colombian 'Provocators' After Border Clashes - Source
On 23 February, the Venezuelan opposition tried to ensure deliveries of humanitarian aid to the country from neighbouring Colombia and Brazil that resulted in clashes with security forces because Maduro regards the deliveries as a ploy to topple his government.

The situation in the Latin American country escalated on 23 January when opposition leader Juan Guaido declared himself interim president, disputing last year's re-election of Maduro. The United States and some other countries supported the move, recognising Guaido. Russia, China, Mexico, among other nations, voiced support for Maduro, who, has accused Washington of orchestrating a coup.