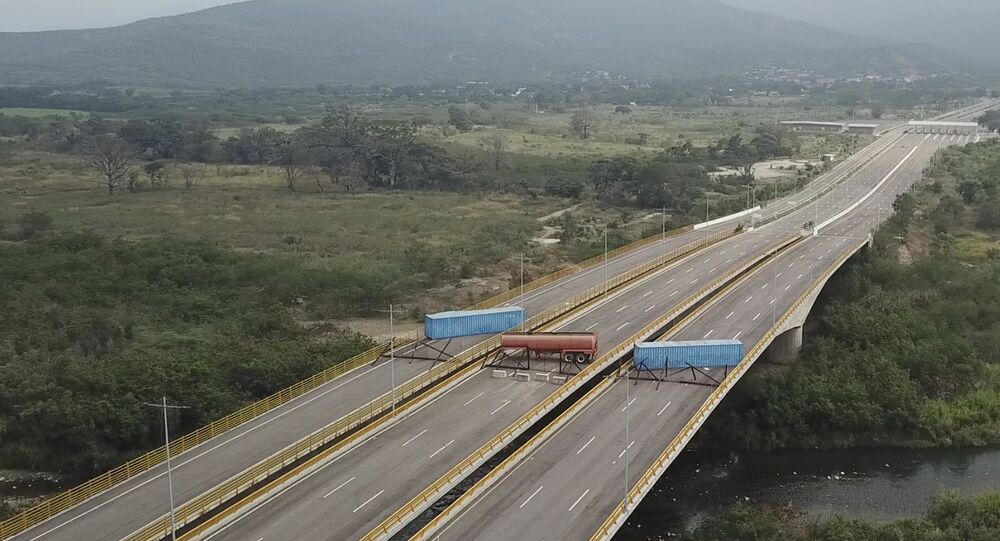 Previously, the Venezuelan opposition stated that the delivery of US aid to Venezuela would begin on 23 February. The government of President Nicolas Maduro plans to prevent the aid from being supplied to the country. The president has slammed the US move as an attempt to overthrow government.

Venezuela's Foreign Minister Jorge Arreaza said that Venezuela had updated UN Secretary-General Antonio Guterres on Washington's plan to "force" aid into the country, adding that the UN chief was watching the situation closely.

"We brought him [Guterres] up to speed with the… propaganda machinery on the way on our borders and this is in violation of international law without the authorization of the United Nations and without even the authorization of the International Red Cross," Arreaza said on Friday. "We see theoretically humanitarian assistance being forced into Venezuela without compliance with the most elemental principles required to do so. The Secretary General is watching this closely."

Arreaza also said that blaming deaths at the Venezuelan border on Maduro is a part of Washington's "script". He added that reports of light weapons use at the border are incorrect and that the military would never have orders to fire at civilians.

On Friday, local media reported that clashes between the Venezuelan security forces and indigenous people living in the southeastern state of Bolivar resulted in two people killed, while 22 others have been injured.

"Your question is full of venom, [it] is poisonous, it is no way related to the versions that I have had," Arreaza told reporters on Friday answering a question about alleged civilian casualties. "Members of the Venezuelan military… will never have orders to fire on the civilian population. They are there to defend Venezuelan territory from any armed attack against our country."

© AFP 2021 / Nelson Almeida
Brazil Halts Aid Delivery to Town Near Venezuelan Border – Military
The minister reported that Venezuela has a meeting pending with US Special Envoy Elliott Abrams to discuss the status of American diplomats. "With respect to the prior agreement we are in discussions and we can only hope that in the days while we are here in New York that there is a meeting pending as suggested by Mr. Elliott Abrams where we would meet," Arreaza said on Friday.

Meanwhile, Russian Ambassador to the UN Vassily Nebenzia stressed that the United Nations Security Council should react immediately to any provocative incident that might occur on the borders of Venezuela.

"I think that the Security Council should react to it immediately," Nebenzia said on Friday responding to a question about what should be done in case of a provocation on the border.

© REUTERS / Andres Martinez Casares
Venezuelan Opposition Leader Guaido Arrives at Colombia's Cucuta - Reports
On 21 February, Venezuelan opposition leader Juan Guaido, alongside members of the opposition-led parliament, set off to the country's border with Colombia to welcome the delivery of US aid despite Maduro's pledge to turn it back. The US relief aid had been collected at logistics hubs in Brazil's Roraima, Colombia's Cucuta and on the Caribbean island of Curacao.

Guaido, the speaker of Venezuela's parliament, proclaimed himself the country's interim president on 23 January. Maduro has called Guaido a US puppet and accused Washington of organising a coup in the country. The United States, followed by a number of other countries, immediately recognised Guaido's administration, while Russia, China, Mexico and Turkey, along with others, have emphasised that Maduro is the legitimate president and called for dialogue.