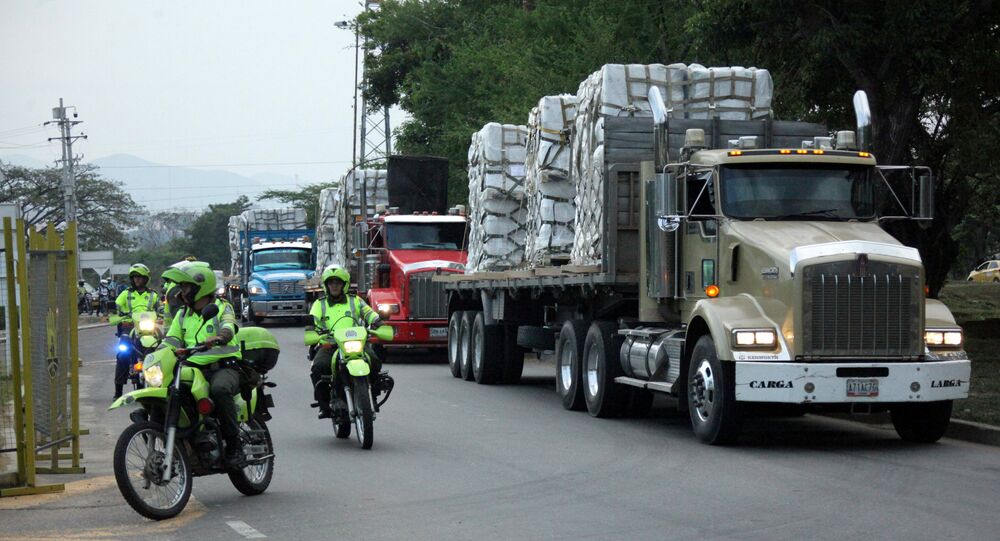 WASHINGTON (Sputnik) - Any claims that the US shipments to Venezuela are anything other that humanitarian assistance for the Latin American country are absurd, a State Department spokesperson told Sputnik.

© AFP 2021 / Nelson Almeida
Brazil Halts Aid Delivery to Town Near Venezuelan Border – Military
"The United States is airlifting and pre-positioning additional humanitarian commodities to provide relief to Venezuelans coping with severe food and medicine shortages, in response to Venezuelan Interim President Guaido’s call for international humanitarian assistance," the official said on Friday. "The peaceful transport missions were planned at the request of the Department of State, in close coordination with USAID, and with the approval of the Government of Colombia. Any claims that these shipments are something other than humanitarian aid are simply preposterous."

Earlier, the Venezuelan opposition stated that the delivery of US humanitarian aid to Venezuela would begin on 23 February. The government of Nicolas Maduro intends to prevent the aid from being supplied to the country. The president has slammed the US move as an attempt to overthrow the government. Maduro has warned that the US and its allies were using "the pretext of delivering humanitarian aid" to try to "destroy the independence and sovereignty of the country."

Venezuelan opposition leader Juan Guaido set Saturday as the date for bringing in US relief aid that had been collected at logistics hubs in Brazil's Roraima, Colombia's Cucuta and on the Caribbean island of Curacao.

In January, the United States, Canada and a number of other countries have recognised Guaido after he proclaimed himself president, while Russia, China, Mexico and Turkey, along with others, have emphasised that Maduro is the legitimate president and called for dialogue.