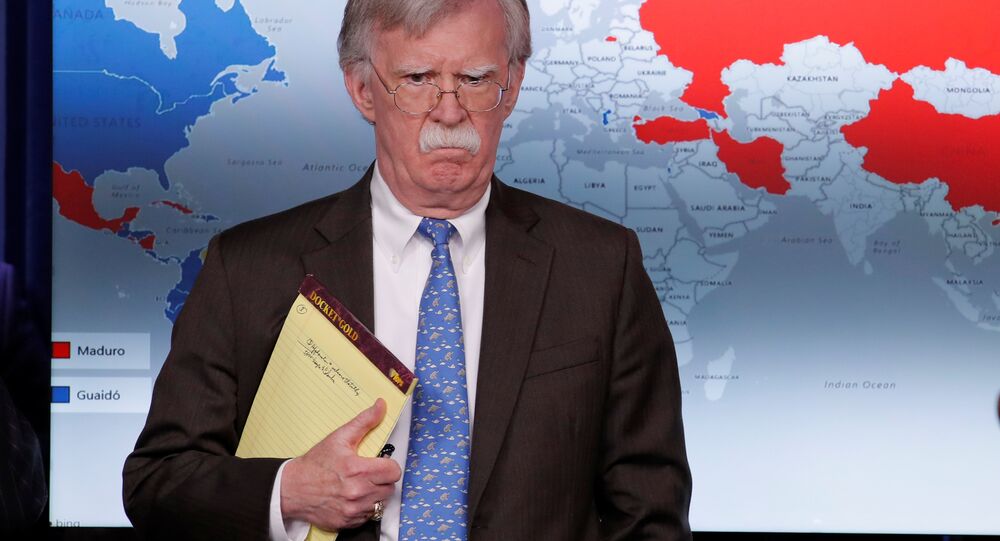 Earlier, the hawkish Trump advisor was mocked by Russian Foreign Ministry spokeswoman Maria Zakharova over his claims about "consequences" for those who seek to "destroy Venezuela's democratic institutions," with Zakharova implying that Bolton should look in the mirror.

US National Security Adviser John Bolton has issued a fresh series of menacing tweets against Washington's adversaries in Latin America, including a message targeting the Venezuelan military and a threat against Nicaraguan President Daniel Ortega.

The first two tweets concentrate on Venezuela, with Bolton warning that "any actions by the Venezuelan military to condone or instigate violence" against civilians bringing humanitarian aid into Venezuela would "not be forgotten," and stressing that "leaders still have time to make the right choice."

Any actions by the Venezuelan military to condone or instigate violence against peaceful civilians at the Colombian and Brazilian borders will not be forgotten. Leaders still have time to make the right choice.

The Venezuelan military must uphold its duty to protect civilians at the Colombian and Brazilian borders, and allow them to peacefully bring in humanitarian aid without violence or fear of persecution.

The tweets followed the Venezuelan military's announcement on Tuesday that it would be "on alert" against forces engaging in "violations" of Venezuela's territorial integrity amid plans by opposition-backed groups to bring Western humanitarian aid into Venezuela.

In a third tweet, Bolton attacked Nicaraguan President Daniel Ortega, accusing his government of killing "300 activists" in street protests in 2018 and blasting his "regime" for sentencing protest leaders to "550 years in prison", warning that "Ortega's days are numbered."

The Ortega regime has sentenced three farm leaders to 550 years in prison for their roles in protests in 2018, where Ortega’s police forces reportedly killed 300 activists. As President Trump said Monday, Ortega’s days are numbered and the Nicaraguan people will soon be free.

© AP Photo / Ariana Cubillos
US Blockade Has Cost Every Man, Woman & Child in Venezuela Over $12,000 Since 2013 - Report
Like Venezuela, Nicaragua has been facing street protests and violence, with the Central American country's crisis starting last April, after protesters took to the streets to protest unpopular social security reforms. President Ortega ended up cancelling the reform plans, but protests have persisted and grown.

The United States accused the Ortega government of multiple human rights violations, as well as censorship of anti-government media. In December, President Trump imposed crushing sanctions against Nicaragua, known as the NICA Act, which limited the country's ability to obtain financing from international organisations. Russia has accused the US and its allies of "stoking" social unrest in Nicaragua "with a single aim — to change the government."

Late last year, John Bolton coined the term "troika of tyranny" to refer to Cuba, Venezuela and Nicaragua. Bolton promised that unlike previous administrations, the Trump White House would "no longer appease dictators and despots near our shores in this hemisphere."