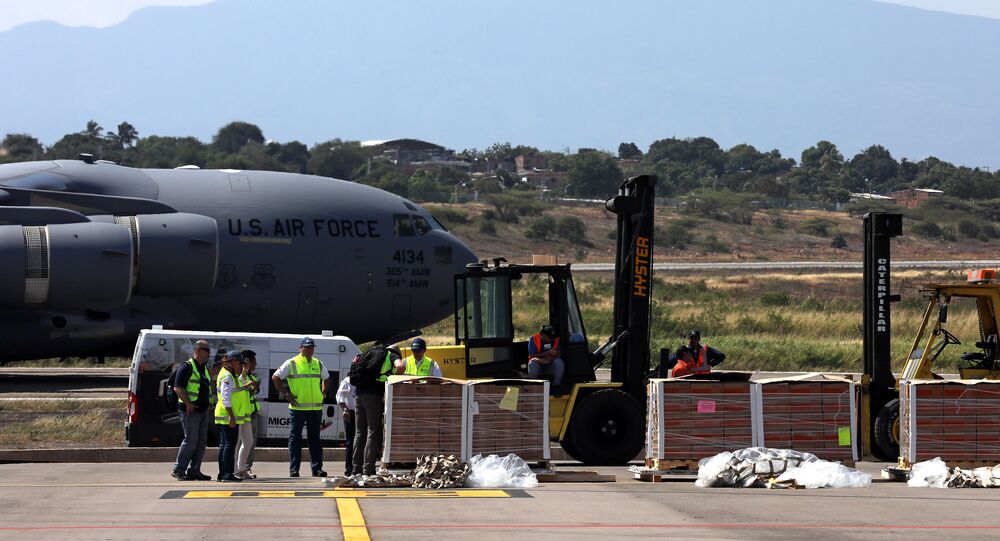 Venezuelan Government Accuses US of Threatening With Military Aggression

The US military has been airlifting food, medical supplies and other products to a Colombian border town despite President Maduro blocking the way for their delivery to Venezuela. The US-backed opposition leader Juan Guaido has declared 23 February as the day humanitarian aid would enter the country.

"The best thing Donald Trump can offer to Venezuela is military aggression!" she tweeted on Tuesday. "It is the type of imperial assistance that [the United States] has provided to Iraq, Libya, [and] Syria. The people of Venezuela will never allow any empire to threaten our national integrity again! [We will stay] free in peace forever."

Her comments came in response to a government statement published by Venezuelan Minister of Foreign Affairs Jorge Areaza, which chastised Donald Trump for threatening the country with military aggression and violating the UN Charter.

"Given the evident failure of the coup agenda designed in Washington with the aim of establishing a puppet government in Venezuela to endorse the plundering of its resources, Donald Trump now intends to dictate direct orders to the Venezuelan military to ignore the Constitution," read the statement.

Speaking at a rally in Miami on Monday, US President Trump called on the Venezuelan military to back opposition leader Juan Guaido.

Trump added that Venezuelan servicemen are risking their future and lives and urged them to "set their country free" — a speech that Venezuelan President Maduro called "almost Nazi-style".

Trump's plea came at a time when US humanitarian aid to Venezuela has amassed at the country's border with Colombia. The supplies were delivered by three US Air Force C-17 aircraft, each capable of transporting up to 100 troops and 80 tonnes of cargo.

President Maduro will not let the supplies in, and claims that the US aid is a pretext for military intervention in the Bolivarian Republic.

Venezuela, which is going through a sharp economic and constitutional crisis, has been receiving humanitarian aid from counties that supported the current government such as China, Cuba, and Russia.

On Monday, Maduro announced that Russia would deliver 300 tonnes of humanitarian aid to Caracas.

Juan Guaido, the head of the country's opposition-run Congress who proclaimed himself interim president last month, said that the aid would enter the country on 23 February.

The United States and its allies almost immediately threw their weight behind Guaido after he stood up to Maduro, with Trump saying that the US military intervention in Venezuela remains 'an option'.

Russia and China, among a spate of other nations, say that they recognise Maduro as Venezuela's only legitimate president.