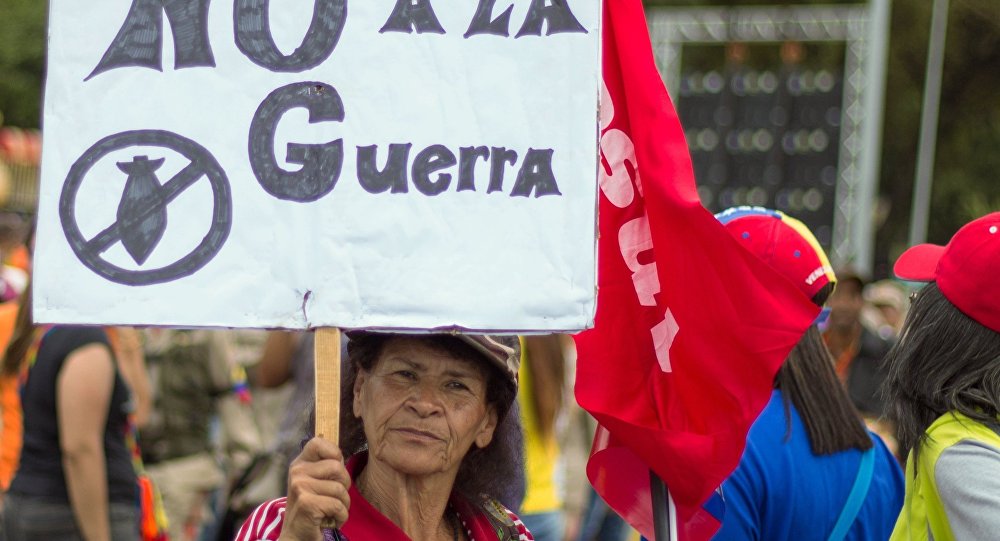 The collective action follows weeks of pressure from the United States, backing Venezuelan opposition leader Juan Guaido, who has declared himself the country’s interim president, and urging incumbent President Nicolas Maduro to step down.

The group, which numbers more than 50 countries, including Russia, Cuba, China, Iran, would defend the key principles of the United Nations Charter that are being violated by the United States’ actions in Venezuela.

“Today we are announcing an important group of nations concerned about the need to retain respect for the founding principles of the UN Charter. We believe that these principles are being violated. We all have the right to live without the threat of force”, Arreaza said, citing sovereignty, equality of UN members in the General Assembly, non-intervention in domestic affairs, and the peaceful settlement of disputes.

Arreaza elaborated that the new group would be conducting “a series of actions to increase awareness around the dangers that our peoples currently face, particularly the case of the Bolivarian Republic of Venezuela. We call upon all the member states of the UN to join us in defending international law as the only guarantor of… peaceful coexistence”.

The foreign minister said that the United States was trying to starve Venezuela and now is offering to send humanitarian aid.

“The US has blocked our economy of $30 billion… and they are sending humanitarian aid of $20 million? [They are] choking you, killing you and now saying ‘I am giving you a cookie’”, he added, probably referring to “high-energy biscuits packed with vitamins and minerals”, which Washington said were being airlifted to Colombia to be delivered to Caracas.

Commenting on reports that the US has been trying to turn Venezuela’s armed forces against President Maduro, Arreaza said that Washington needed to “rethink your strategy” because “this test of loyalty of the military is over”.

In a parallel development, Russia’s permanent representative to the UN Vassily Nebenzia also expressed alarm over how events are unfolding in the South American country:

“We are very concerned that some hotheads are considering military action. We are categorically against it. It’s not just about the Maduro government. It’s about defending international law and the UN Charter”.

The statements by the diplomats come amid the Trump administration’s repeated claims that a military intervention in Venezuela was “an option”.

Responding to Trump’s remarks, Maduro has warned that he would make the US interference irreparable if Washington chooses to go ahead with the military option:

“We are planning to respond to a US intervention in such a way as to make [the US] suffer irreparable military and human losses”, he said.

During a hearing on the Venezuela crisis earlier this week, House of Representatives Foreign Affairs Chairman Eliot Engel said that US military intervention “is not an option”.

“Congress decides when, where and how the US military is used around the world, and Congress would not support military intervention in Venezuela”.

Venezuela’s self-proclaimed interim president Juan Guaido, in turn, has refused to rule out the possibility of authorising US military meddling to force out Maduro from office and end the humanitarian crisis.

© AP Photo / Marcelo Garcia
US Special Envoy Claims Ending Venezuela Crisis Necessitates Maduro's Resignation
In an interview with AFP, he said that he would do “everything that is necessary… to save human lives”, acknowledging that Washington’s interference was a “very controversial subject”.

The situation in the Latin American country further deteriorated after the head of the opposition-led National Assembly, Guaido, declared himself the interim head of state, and earned recognition of the United States, a handful of regional countries, and a number of European nations.

Since then, Washington has ramped up its efforts to make Maduro step aside in favour of Guaido, resorting to steep oil sanctions, while Maduro, as the legitimately elected president, has accused DC of staging a coup d’etat in the country.

Last week, Reuters cited an unnamed senior White House official as saying that the Trump administration was engaged in direct contacts with members of the Venezuelan armed forces, trying to convince them to pledge allegiance to Guaido.

Shortly before those claims, US National Security Adviser John Bolton tweeted that Washington would consider lifting sanctions on any senior military officers if they turn their backs on Maduro:

Maduro has slammed US sanctions as illegal, and broke diplomatic ties with Washington, having also said that a group of Venezuelan military defectors were conspiring in Colombia to "divide the national armed forces” at his command.

He also denounced a meeting between Trump and Colombian President Ivan Duque as a “feast of hatred” toward Venezuela.

“Today, the US president threatened to pursue a military invasion of Venezuela. I am asking the peoples of the world to express their solidarity [with Caracas]”, said Maduro, who’s spearheading a signature collection campaign against a US military intervention.