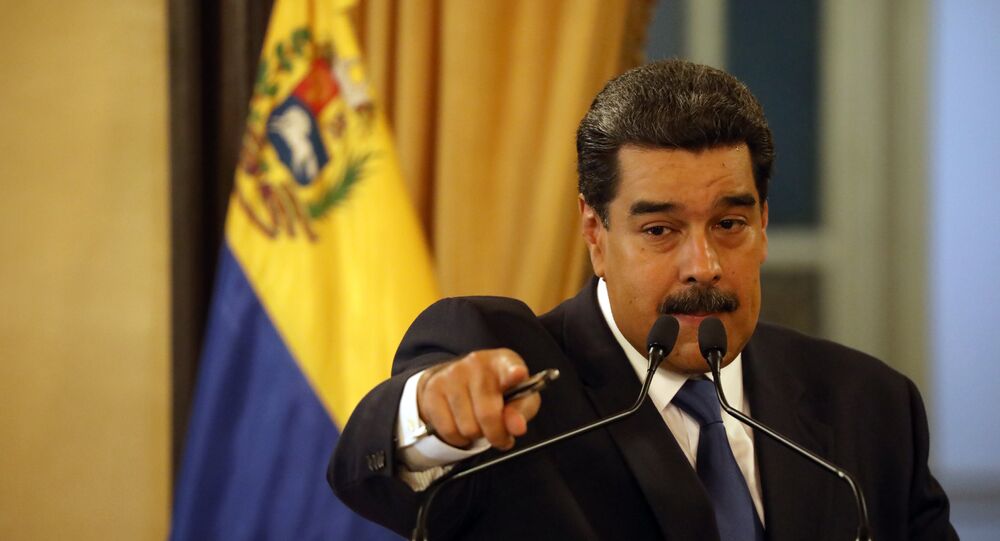 Maduro Slams Trump-Duque Meeting as 'Feast of Hatred Toward Venezuela'

MEXICO CITY (Sputnik) – Venezuelan President Nicolas Maduro has castigated a recent meeting between US President Donald Trump and Colombian counterpart Ivan Duque, during which the Venezuelan crisis was discussed.

"It was a feast of hatred toward Venezuela […] Today, the US president threatened to pursue a military invasion of Venezuela. I am asking the peoples of the world to express their solidarity [with Caracas]", Maduro said in an address aired by his Periscope channel.

The Venezuelan president continued by noting that a signature collection campaign against a US military intervention in the country would be continued.

The Venezuelan authorities have sought to collect 10 million signatures in a letter calling on Trump to abandon his intervention plans, which the US president said were "an option" to settle the existing tensions.

© Sputnik / Sergei Guneev
Venezuela to Increase Oil, Gold Production in 2019 Amid Domestic Crisis - Maduro
In his address on Wednesday, Maduro urged his compatriots to sign the letter.

"Trump is silent about cocaine. When will the production of cocaine and drug trafficking from Colombia to the United States and Europe stop, Ivan Duque? When? Instead of speaking about increasing poverty, war in Colombia, politically-motivated murders and the failed state, they are talking about Venezuela", Maduro argued.

Maduro continued by noting that Venezuela had "moral rights and a Constitution and will make everyone respect them".

Trump and Duque conducted a bilateral meeting at the White House on Wednesday.

© AP Photo / Fernando Llano
Venezuelan Opposition Leader Guaido Says Humanitarian Aid to Enter Venezuela on 23 February
After the meeting, the two presidents issued a joint statement, saying that Washington and Bogota were determined to work together to resolve the ongoing political crisis in Venezuela and provide "humanitarian aid" to the Latin American country.

Maduro firmly opposes any aid from abroad, stressing that there is no humanitarian crisis in the country and pledging to prevent foreign intervention.

On Monday, Christoph Harnisch, the head of the International Committee of the Red Cross (ICRC) in Columbia, said his organisation will not assist in delivering the goods to Venezuela because the ICRC does not consider US assistance to be humanitarian aid.

Venezuela is facing escalating political tensions. In January, opposition leader Juan Guaido proclaimed himself the country’s interim president and was immediately backed by both Washington and Bogota, as well as a number of other states. Constitutionally elected Maduro, for his part, has received support from China and Russia, among other countries.