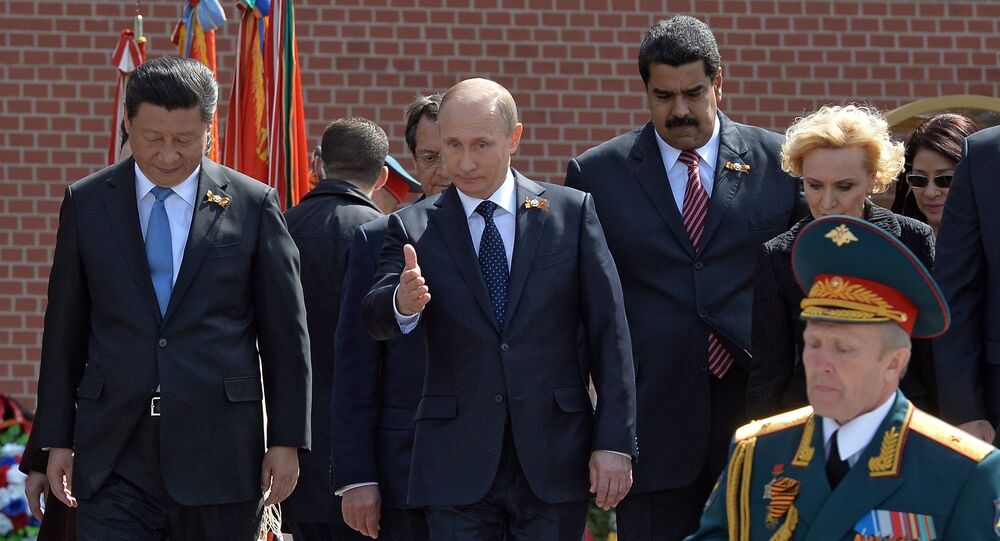 Washington and its allies have stepped up political and economic pressure on the Latin American country in recent months, with a recent think tank report concluding that the US financial blockade of the country has cost Caracas up to $350 billion in economic losses over the last half-decade.

"We are not in isolation…we have great allies," Ceballos stressed, when asked about the fifty or so countries who have joined the US in supporting self-proclaimed interim president Juan Guaido last month.

"We have the support of more than 180 countries in the international community, especially at the juncture that we are in right now," the commander said.

© AP Photo / Ariana Cubillos
US Blockade Has Cost Every Man, Woman & Child in Venezuela Over $12,000 Since 2013 - Report
Ceballos stressed that Venezuela's armed forces have maintained contacts with major military powers, with China, Russia, Iran, Belarus and Kazakhstan engaged in training or invited to participate in military exercises.

Over the weekend, Caracas launched the country's largest-ever military exercises, practicing the defence of Venezuela's territory, coasts, rivers and airspace from foreign invasion, and drilling for civil and military mobilization in the event of war. The drills come amid threats by the White House that the US would not take the 'military option' off the table on the Venezuelan crisis.

Ceballos boasted that Venezuela's armed forces have been "modernized," and said the Latin American nation has the "means to guarantee the integrity" of its territory and airspace.

© REUTERS / Miraflores Palace
President Maduro Officially Launches Venezuela's Largest Ever Military Exercises
At the same time, Ceballos admitted that there were states in the Western Hemisphere, such as the US, Canada, and Washington's allies in the Organisation of American States, who "exert influence and threaten Venezuela through diplomatic channels" by supporting Guaido.

Ultimately, the senior officer stressed that the country's armed forces remained consolidated around the country's president, stressing there were 'do doubts' regarding their loyalty despite pressure by Guaido and his US allies to switch sides.