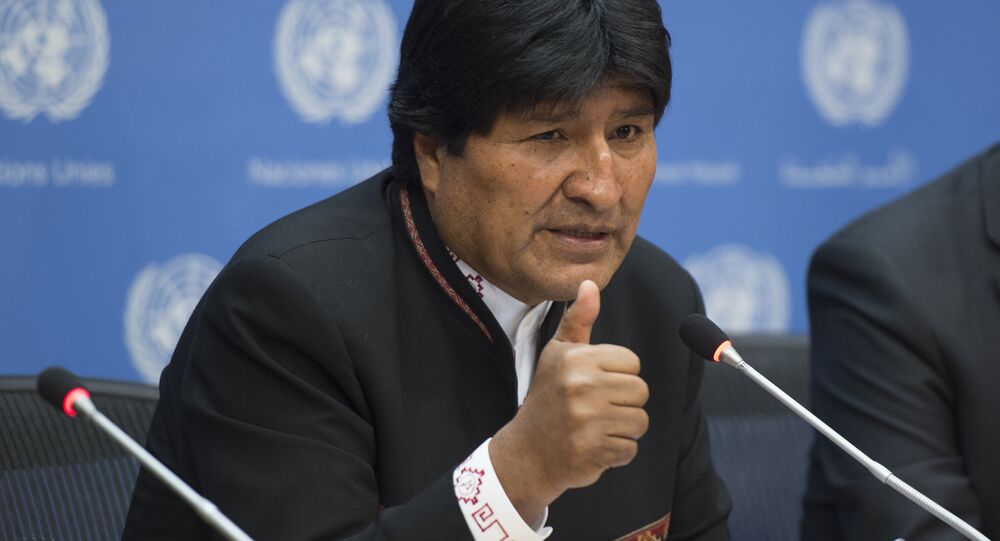 MONTEVIDEO (Sputnik) - The United States is demonstrating double standards toward Venezuela, by first "strangling" the country’s economy with the help of sanctions, and then allocating humanitarian aid to it at the request of opposition, Bolivian President Evo Morales has stated.

"In a display of double moral standards, the United States announces ‘humanitarian aid’ to the people of Venezuela after having strangled it by economic means in the form of sanctions and illegal confiscations. The United States is destroying the principle of international law by providing ‘humanitarian aid’ to the coup d'etat," Morales wrote on Twitter.

The statement comes after media reported on 7 February that the first batch of US humanitarian aid to Venezuela — two 50-tonne containers and at least six trucks — had reached the Colombian border city of Cucuta.

Meanwhile, the opposition also plans to hold an international conference for humanitarian aid donors in Washington on February 14.

Venezuela has been suffering from political and economic crisis triggered by the fall of global oil prices, with the opposition actively using the deteriorating humanitarian situation in its rhetoric.

© AP Photo / Fernando Llano
Venezuela Did Not Request Russian Military Assistance Amid Crisis - Moscow
On January 23, the crisis took a new turn when the speaker of the opposition-led Venezuelan National Assembly, Juan Guaido, declared himself interim president amid ongoing anti-government protests. The next day, the United States, which swiftly recognised Guaido, said that it was ready to provide the country with more than $20 million in humanitarian assistance.

Venezuelan President Nicolas Maduro accuses Washington of staging a coup. Unlike the United States and its allies, Russia, Bolivia, China among other countries, continue to recognise Maduro as the country’s only legitimately-elected president and demand that others respect the principle of non-interference in Venezuela's internal affairs.