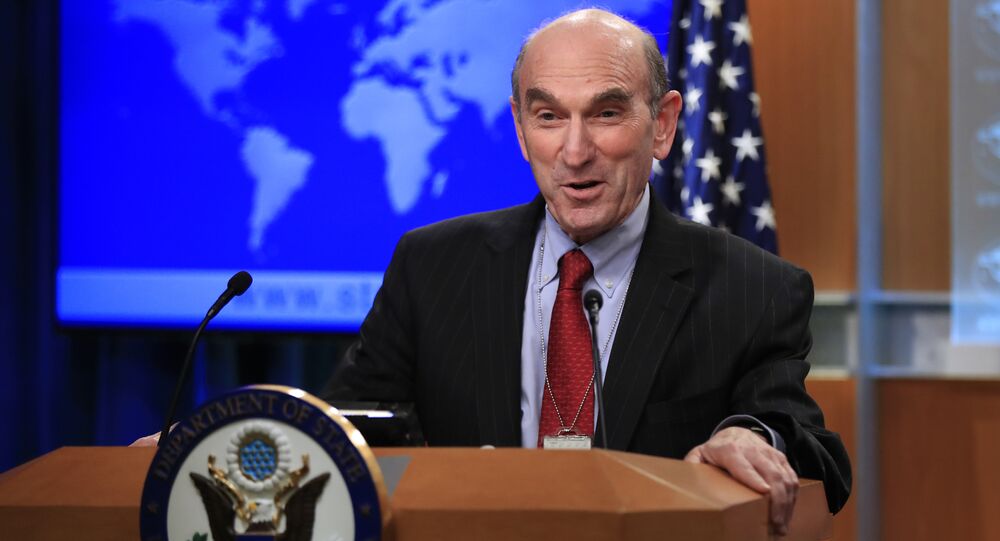 Elliott Abrams, US President Donald Trump's special envoy to Venezuela, told a US State Department press briefing Thursday that the time for dialogue with Venezuelan President Nicolas Maduro has "long passed" and advised other countries to deal with Juan Guaido, the self-appointed interim president recognized by Washington.

© AP Photo / Fernando Llano
Venezuela Humanitarian Aid: 'Noble Gesture' or Demonstration of Strength?
Abrams also said the US was imposing visa bans on "illegitimate" members of the Maduro-controlled Venezuelan Constituent Assembly. The body was elected from a cross-section of Venezuelan society in 2017 to draw up a new constitution for the country, but aroused criticism by opposition forces who said it was anti-democratic. The Constituent Assembly later disempowered the Parliament after it refused to recognize the assembly's legal superiority.

Guaido, the speaker of the disempowered National Assembly, declared himself to be interim president of Venezuela on January 23 during a rally to commemorate the fall of the military dictatorship in 1958. Maduro, who won reelection last May, was sworn in to his new term on January 20, and massive protests both for and against his government have swept the nations since several days before the inauguration. Guaido, who a recent poll showed is unknown to 80 percent of Venezuelans, did not run in that election race.

The envoy said the "end game" for Maduro should be for him to leave power, noting it was preferable for Maduro to leave the country afterward and that countries had privately approached the US offering to take in members of Maduro's government.

Responding to a question about trucks carrying humanitarian aid that had arrived at the Venezuelan border with Colombia Thursday, Abrams said "I don't think that we or the Colombians or the Brazilians or anyone else is planning to try to force [the aid] in [to Venezuela]."

The Lima Group of 14 nations dedicated to forcing regime change in Venezuela decided last week during an Ottawa meeting to use the offer of humanitarian aid as a bargaining chip. However, on Wednesday the Venezuelan government blockaded a major highway crossing the border in order to stop additional shipments into the country after officials said they'd seized a large shipment of weapons the previous day.

​"If he [Maduro] sees a real demand on the part of the Venezuelan people, let it in," Abrams said of aid sent to the South American nation. "That's all we're asking. Let it in."

Abrams commented that if a transition to a "free and democratic government" without Maduro at the head hasn't commenced soon, "it will be the fault of the regime" and no blame should be placed on either Guaido or the National Assembly.