Venezuela reportedly halted plans to sell hundreds of millions of dollars' worth of gold to a firm in Abu Dhabi over the weekend amid US and British efforts to freeze the country's assets abroad and put the pinch on Caracas' ability to obtain much-needed cash to keep the country running.

"It is important for three reasons. First, gold can act as fresh cash to help (Maduro's administration) survive. Second, it can help provide security or military protection. And, third, it can help them to live, hide and maybe even prepare a comeback," Moya-Ocampos explained.

© REUTERS / Jorge Silva
Tankers Pile Up in Gulf of Mexico Due to US Sanctions on Venezuelan Oil – Report
Venezuela was forced to begin selling off some of its foreign reserves, including gold, amid growing US sanctions pressure and falling oil production, starting last year. According to Moya-Ocampos, about two thirds of Venezuela's foreign exchange reserves, worth an estimated $8.8 billion, are held in gold.

According to Claude Barfield, a former consultant to the office of the US Trade Representative specializing in international trade policy, Caracas' recent inability to sell 15 tonnes of gold worth some $850 million to a firm in the Middle East seemed connected to the US effort to choke off the country economically.

"I'm not an expert in the gold market, but I would say that it's a part of a series of US actions that are trying to close off any means of getting additional financial aid for the Maduro regime," Barfield said, speaking to Radio Sputnik.

Asked why the Abu Dhabi firm which intended to purchase the precious metal backed down, Barfield said they may have "got caught" by the US.

"They weren't certain how far the United States was going to go, they were feeling their way and, as it turns out, the United States had intended to fully ratchet-up actions against Maduro, step-by-step, and I think they got caught," he said. 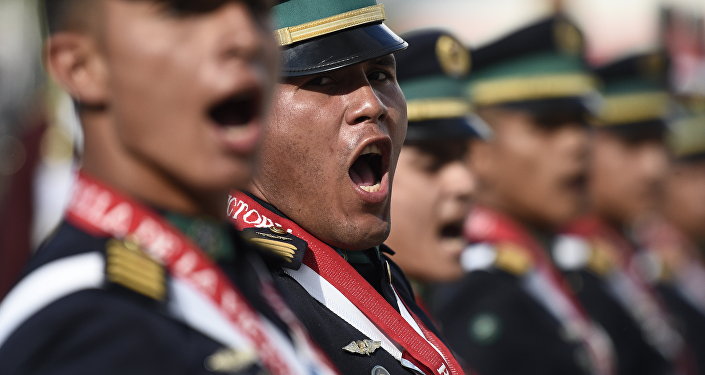 © AFP 2019 / Federico Parra
Maduro on Possible Intervention: Venezuela to Make US Suffer 'Irreparable Military and Human Losses'
Washington tightened pressure on Venezuela's oil industry last month after blocking assets from Venezuela's state-owned PDVSA oil and gas giant in its jurisdiction and banning US crude oil importers from doing business with the company. The move left over a dozen tankers stuck in the Gulf of Mexico and elsewhere outside Venezuelan waters waiting payment or delivery instructions. The US Treasury Department told importers to pay into escrow accounts controlled by self-proclaimed interim president Juan Guaido, but these accounts have yet to be set up.

In addition to having the world's largest proven reserves of oil, Venezuela is rich in mineral wealth, including gold. The country is estimated to have some 10,000 tons in unmined gold, most of it located in the country's southeast.

The political crisis in Venezuela escalated last month after opposition leader Juan Guaido proclaimed himself interim president in what the Maduro government has described as an attempted coup d'etat. The US, Canada and over a dozen European and Latin American countries voiced their support for Guaido's takeover attempt, while Russia, China, Mexico, Cuba, Bolivia, Nicaragua, Iran, and Turkey condemned it and urged outside powers not to meddle in Venezuela's affairs.