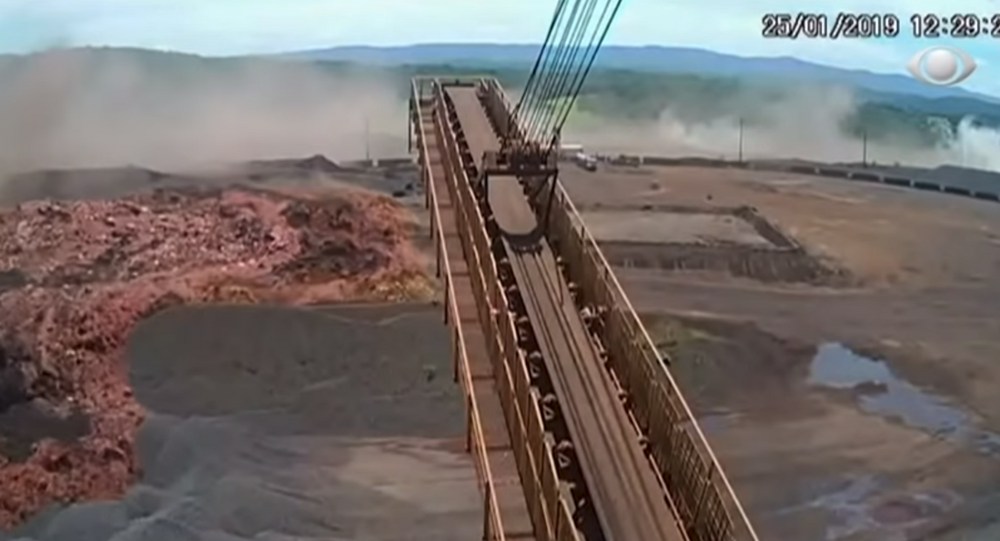 Surveillance footage provided to Brazilian investigators this week by the country's National Mining Agency documents the exact moment that the iron ore mine in Brazil's Brumadinho municipality collapsed.

The recording begins with a train car whizzing past the site before suddenly coming to a full stop as a cloud of dust emerges from behind it. As bursts of dust continue to rise along the forest line, a surge of mud enters the camera frame from the left. A handful of vehicles are seen scrambling to safety as mud envelops the site.

Per the camera's timer, the incident unfolded at approximately 12:28 p.m. local time. It took a little more than three minutes for the entire work site to become completely covered with mud.

​The footage was obtained and released to the public by TV Bandeirantes on Friday.

"The video will serve as a fundamental material to determine what actually occurred there, and may point to errors," Victor Bicca, director general of the mining agency, told Brazilian outlet O Globo.

Previously released footage by TV Globo showed the dam's collapse from the viewpoint of a security camera that had been installed near an administration building away from the mining area.

​An investigation into the dam collapse is ongoing and has resulted in the arrest of five individuals so far. Three of the arrestees were employed by the dam's owner, Vale SA, which is the second-largest mining company in the world.

Investigators have placed the death toll at 110. Another 259 individuals are still missing.

Early reports suggest that the dam burst was caused by liquefaction, a process in which solid material loses strength and turns to liquid, Reuters reported. An official cause has not yet been determined.

This is the second incident involving Vale since November 2015, when a tailings dam operated by Samarco, a joint venture between Vale and BHP Billiton, collapsed, resulting in a large tidal wave that buried huge swathes of nearby farmland and villages underneath mining waste. An independent report later concluded that the liquefaction due to iron ore mining was to blame. The incident killed a total of 19 people.