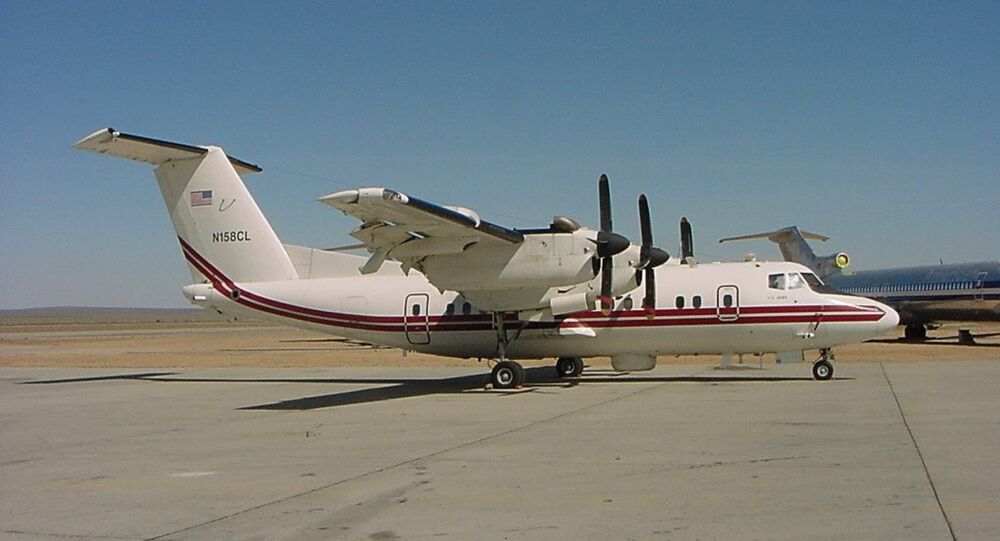 The United States has been backing a de facto coup d’etat in Venezuela by urging incumbent President Nicolas Maduro to step down in favour of Juan Guaido, an opposition leader, who proclaimed himself the Latin American country’s interim president over a week ago.

For the second time in two consecutive days, US reconnaissance aircraft has been spotted over Colombia, and as reported by Aircraft Spots, it is an EO-5C N177RA PLOMO27 spy plane.

A journalist who retweeted the photo assumed that the military aircraft was likely used to intercept communications from neighbouring Venezuela, which has plunged into a political crisis, fuelled by Washington.

Another intriguing US military aircraft spotting over #Colombia now — a @USArmy EO-5C, likely being used for communications intercepts from #Venezuela. https://t.co/OmZykiE32g

A Colombian radio station, The FM, reported Wednesday that a number of planes, including one C17A military transport aircraft Globemaster and one Boeing 737, landed on the outskirts of Bogota at Air Command Military Transport (Catam) airport.

The planes reportedly arrived at about 3:00 pm local time [GMT 20:00] from the Dover air base in Delaware before leaving four hours later.

A rare flight today of a @usairforce Globemaster (max payload: ~77,000 kg) from Dover AFB to #Colombia (and now heading back). It spent ~4 hours on the ground at Bogota. https://t.co/N1u3sjjUnz

The developments come shortly after the photo of US National Security Adviser John Bolton holding a yellow notepad with the words “5,000 troops to Colombia” on it went viral.

© AP Photo / Ariana Cubillos
Ex-Head of Venezuela's PDVSA Energy Firm Says Ready to Run for Presidency
The note was spotted during a press conference about new sanctions against Venezuela.

While many speculated that the US may be plotting to deploy its troops to Venezuela’s neighbour, acting Secretary of Defence Patrick M. Shanahan told reporters that he hadn’t discussed the plan with Bolton and refused to comment.

The speculations have been fuelled by the fact that US President Donald Trump has on a multitude of occasions stated that all options were on the table for Caracas.

Washington has been actively involved in the political crisis in Venezuela, which saw the head of the opposition-led National Assembly, Juan Guaido, declare himself the country’s interim president, thus challenging the legitimately elected Nicolas Maduro.

© AFP 2021 / Romeo Gacad
Bolton's Mysterious '5,000 Troops to Colombia' Note Amid Venezuela Unrest Puzzles Bogota
The Trump administration swiftly recognised Guaido and has ramped up its pressure on Maduro in order to force him out of office.

President Maduro, in turn, has accused the US of staging a coup d’etat in his country, and suggested that a group of Venezuelan military defectors have become “mercenaries of the Colombian oligarchy”, who are trying to sabotage armed forces at his command.

In an exclusive interview with Sputnik, Maduro also claimed that Trump had ordered the Colombian government and mafia to kill him in order to gain access to the world’s largest oil reserves, which, by a twist of fate, are in Venezuela.

“If something happens to me, it will be Donald Trump and Colombian President Ivan Duque that are responsible for that”, he told Sputnik.