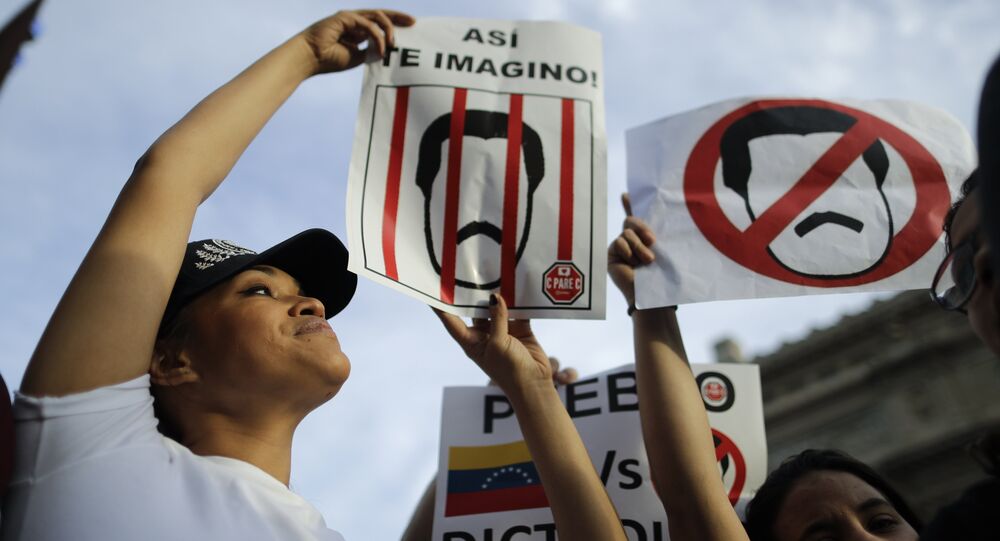 The United Nations Security Council (UNSC) convened on 26 January at the request of the United States to discuss the situation in Venezuela, where opposition leader Juan Guaido proclaimed himself interim president, with the US and a number of its allies recognising him as such.

Vassily Nebenzia, the Russian envoy to the United Nations, said that the current UN Security Council meeting is aimed at further destabilising the situation in Venezuela, and that it is merely another element of a "US regime change strategy in Venezuela".

"Today’s meeting was called by the US delegation with one goal only – to help continue destabilizing the situation in Venezuela, forcing this country to adopt their recipes and methods to resolve problems it [Venezuela] has to deal with recently", he said.

He added that Guaido does not enjoy the support of almost 70 per cent of Venezuela's people, unlike Maduro.

"The United States is painting a confrontation between the Maduro regime and people of Venezuela. This picture is far from reality. In spite of everything, the leader of Venezuela obviously has broad support among people. By the way, according to sociological surveys… the National Assembly leader [Juan Guaido], who is currently positioned by Washington as almost a president is not supported by almost 70 percent of the people of Venezuela," Nebenzia noted.

The Russian Foreign Ministry also stated on Saturday that the United States and its allies artificially aggravate the situation in Venezuela by demanding that Caracas hold "democratic and transparent" elections, threatening to recognise opposition leader Juan Guaido as the new head of state if the Venezuelan government does not comply.

"The cynical, overt interference in the internal affairs of a sovereign state continues. It is necessary to put an end to this," the ministry stated.

US Urges the World to Recognise Guaido as Venezuelan President

Meanwhile, US Secretary of State Mike Pompeo called on other countries to disrupt financial flows to Venezuela's government.

"We hope that each and every nation will join us in recognizing interim president Juan Guaido… We hope too that each of those nations will ensure that they disconnect their financial systems from the Maduro regime and allow the assets that belong to the Venezuelan people to go to the rightful governors of that state," Pompeo told reporters on the sidelines of the UN Security Council meeting.