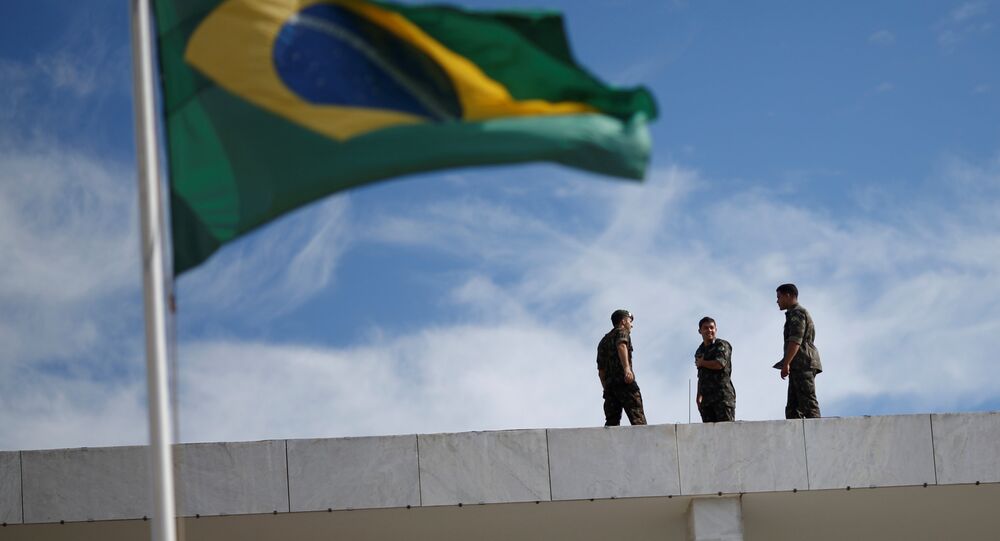 BUENOS AIRES (Sputnik) – Brazilian President Jair Bolsonaro, who was sworn in earlier in January, expressed concern about the recent drills carried out by Russian combat planes in Venezuela.

In December, two Russian Tu-160 strategic bombers, an An-124 military transport aircraft and an Il-62 plane arrived in Venezuela where they held joint exercises with the South American country’s Air Force.

"Russia carried out maneuvers in Venezuela. We are aware of the intentions of the dictatorship of [Venezuelan President Nicolas] Maduro. Thus, Brazil should be concerned about it," Bolsonaro said in an interview with the local SBT broadcaster.

© REUTERS / Ricardo Moraes
Bolsonaro Vows to 'Rebuild' Brazil, Tackle Corruption, End Discrimination
The Russian planes subsequently returned to their home bases. However, Russian officials have suggested that more jets might fly to Venezuela in the future.

Bolsonaro also did not rule out that his country might sign military cooperation deals with the United States.

"I approach the United States from the economic point of view. But this can be a military point of view, too. We may conclude some agreements on this issue," Bolsonaro said in an interview.

Asked about the possibility of setting up a US military base in Brazil, Bolsonaro said "who knows if it would be necessary to discuss this."

The president argued that Brazil did not want to become a South American super-power, noting that still, the country should have a dominant position in comparison with regional states.

© REUTERS / Ueslei Marcelino
Bogota Rejects Media Reports About Colombia-Brazil Plans to Invade Venezuela
Relations between Brasilia and Washington have been tense over recent years. However, Bolsonaro has repeatedly expressed support for US policies. Notably, populist sentiments voiced by the right-wing Brazilian president have been compared to statements of US President Donald Trump, which prompted media to call Bolsonaro the "Trump of the Tropics."

Bolsonaro has been also among the Latin American leaders who have criticized Maduro’s policies. The Venezuelan president, in his turn, has suggested that the election of Bolsonaro would result in emergence of leftist governments across the region.

READ MORE: 'Price is Too High': Will Brazil and Argentina Help US Intervene in Venezuela?

Brazil Won't Consider US Sanctions When Assessing Projects With Russia