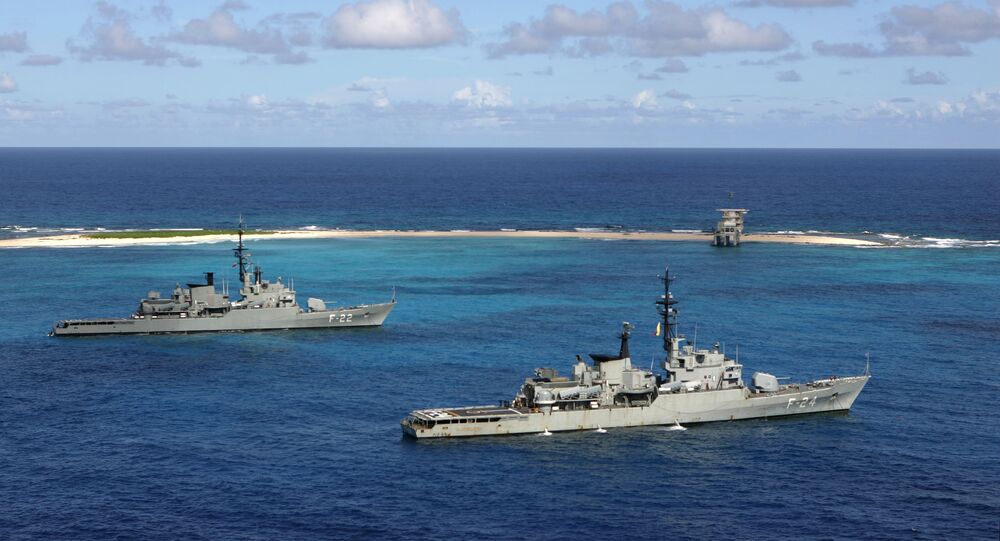 The privately-owned survey vessel was forced to interrupt operations and retreat eastward, the ship’s owner said in a statement.

The Venezuelan Navy intercepted a Bahama-flagged ship conducting a geological survey on behalf of ExxonMobil the waters of neighboring Guyana, according to a Saturday statement from the nation's Foreign Ministry.

​The ship came to a stop and turned eastward as soon as it was approached by the Venezuelan Navy, Stenberg said in a statement.

"Guyana rejects this illegal, aggressive and hostile act," Guyana's foreign ministry said in a statement on Saturday, adding that the move "demonstrates the real threat to Guyana's economic development by its western neighbor" and "violates the sovereignty and territorial integrity of our country."

© AFP 2020 / ERIC PIERMONT
ExxonMobil Resumes LNG Production in Papua New Guinea After Earthquake
In recent years, ExxonMobil has identified offshore oil deposits in Guyanese waters amounting to an estimated 4 billion barrels, giving officials in a nation with no history of oil extraction ambitions to become one of Latin America's largest producers, even as Venezuela, the long-time undisputed regional leader in the petrochemical industry, struggles with a dire economic crisis. The situation is complicated by a century-old territorial dispute between Caracas and Georgetown.

The Guyanese Foreign Ministry said it will file a complaint to the United Nations, as well as send a formal communication to the current Venezuelan government regarding the incident.

​Georgetown also noted that it would inform the governments of various nations that the 70 crew members aboard the ship experienced a "threat to their safety," according to the statement.

© AP Photo / Ariana Cubillos
German Media Suggests Venezuela Might Become Russia's 'New Cuba in US Backyard'
There was no immediate response to the incident from either Venezuela or ExxonMobil, according to Reuters.

Guyana points out that Venezuela relinquished the territory following a ruling by an international tribunal in 1899, a decision that Caracas has since refuted. The United Nations earlier this year referred the dispute to the International Court of Justice, a move welcomed by Georgetown but criticized by Caracas, according to Reuters.