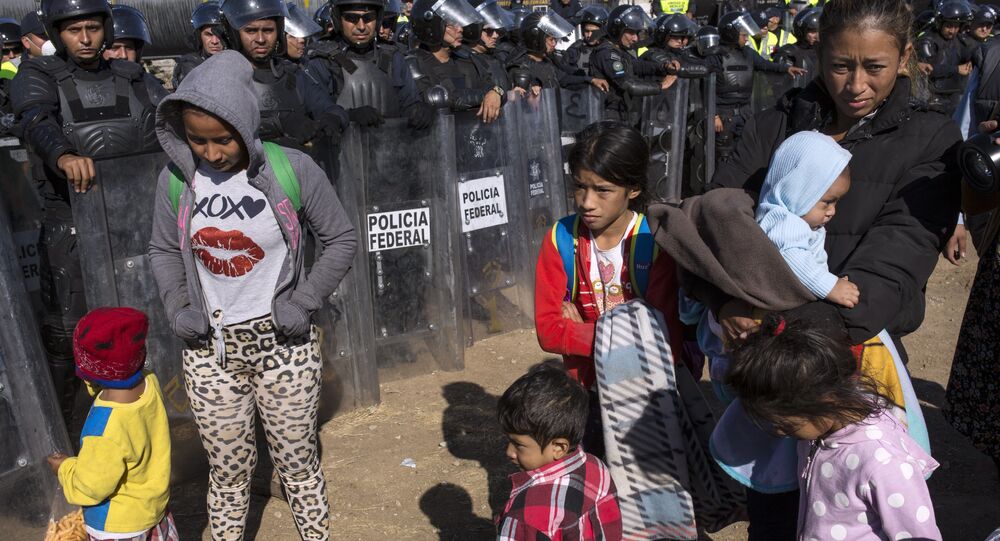 After calling the migrant caravan a “humanitarian crisis,” Mayor Juan Manuel Gastélum said he cannot continue to fund the shelters for migrants without federal support.

Gastélum said that due to the arrival of the caravan, he could be forced to raise taxes for Tijuana’s 1.7 million residents, who have already suffered from Sunday’s clashes on the US border, Fox News reported.

“In those six hours that the border was closed, we lost approximately 129 million pesos,” he said. “That's not fair. How do you think people from Tijuana feel towards those people who are making problems?”

© AFP 2021 / Guillermo Arias
Local Businesses in Mexico Border Town Say Devastated by Migrant Caravan
Around 6,000 Central American migrants, who arrived in Tijuana in order to try and cross the US border, stayed in the tent city camp, with the conditions worsening after nights with heavy winds and rains, leaving wet clothes, sleeping bags and litter all around town after the overcrowded areas were flooded.

Gastélum said the blame lies on the unidentified organisers of the caravan. He said they should be held accountable and face criminal charges.

“Those are the real criminals, because they're dealing with the lives of people,” he pressed.

Gastélum also said that he hopes that incoming Mexican President Andres Manuel Lopez Obrador’s new administration would assist his town in dealing with the migrants, as there are reportedly more caravan members on their way to Tijuana.

“It's problem he must solve as soon as he gets into office,” he said.

“Consistent with the president’s direction to do all within our authority to secure US borders, I am seeking your assistance and ask you to prioritize efforts to help us prevent illegal entry into the United States,” Nielsen wrote.

© AFP 2021 / ANGELOS TZORTZINIS
Migrant Caravan Suffering Mass Outbreaks of Tuberculosis, Skin Infections
The Department of Homeland Security (DHS) told The Hill that it has addressed other federal government agencies “to defend our sovereignty, protect our frontline men and women and secure our border.” According to the memo, it was sent to the Departments of State, Labor, Energy, Transportation, Interior and Justice.

The memo was circulated amid reports that US President Donald Trump has told aides he has considered replacing Nielsen and other officials in his Cabinet, frustrated with Nielsen’s lack of progress on immigration and border enforcement.

The migrant caravan’s members ventured through Mexico towards the US carrying hope for a better future. They were forced to stop at the American border, which has been heavily reinforced following directives from Trump, who has dubbed the caravan an “invasion.” On November 25, some of the migrants clashed with US Border Patrol agents, who dispensed tear gas in response to thrown stones.

US Homeland Security: ‘Over 600 Convicted Criminals Are Travelling With Caravan’