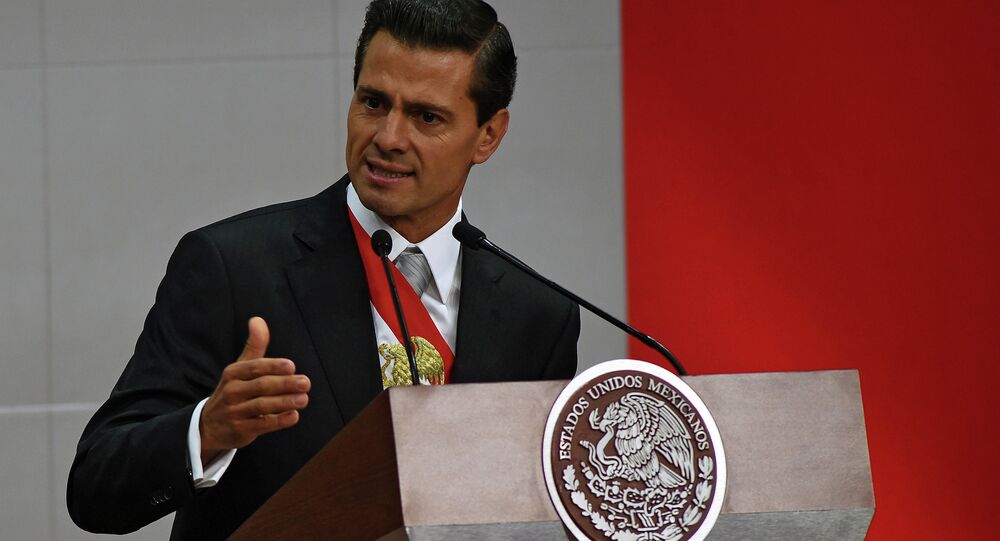 MEXICO CITY (Sputnik) - Enrique Pena Nieto is spending his last day as Mexican president away from his homeland and in Buenos Aires for the G20 summit. His participation in the summit, however, will be limited, because Pena Nieto has to be in Mexico City on December 1 to pass the baton of governance to his successor, Andres Manuel Lopez Obrador.

Pena Nieto has been serving as the head of Mexico since December 1, 2012. His last day in office is the appropriate time to look back and assess what Mexico, the second most populated country in Latin America after Brazil, has achieved over this period.

© AP Photo / Andres Kudacki
Enrique Pena Nieto Vows to Defend Mexico's Interests in Trade Talks With US
Pena Nieto became president in 2012 as a representative of the country’s most "honoured" party, the centrist Institutional Revolutionary Party (PRI). Its nominees had previously led the country for several decades, but the tradition was broken in 2000 when the candidate from the National Action Party (PAN), Vicente Fox, came to power, and then again in 2006 when another member of the same party, Felipe Calderon, took office for another six-year term.

It was important for Pena Nieto to show that he was not a going to follow in the footsteps of his party's previous administrations, under which the country was mired in corruption and stagnation, but instead was going to represent a new, modernized PRI.

The main things that the outgoing president was able to achieve were telecommunications and energy reforms. In 2013, for the first time since March 1938, when oil was nationalized by President Lazaro Cardenas, access to private investment financing was authorized in Mexico. This is when investments began to flow into the country. Opportunities to develop dozens of mineral deposits was given via tenders to foreign companies, including Russian oil giant Lukoil.

Pena Nieto himself, summing up his work, highlighted that $200 billion in foreign direct investment had been brought into the Mexican economy, four million new jobs had been created, and economic and political stability had been preserved. He also pointed to his work on ensuring the people's right to health care and education and developing road, port and airport infrastructure, agriculture, and tourism.

"Transformation without destruction" was how the outgoing president summarized his accomplishments.

According to Pena Nieto, he managed to fulfil 97 percent of his election promises.

The revision of NAFTA began at the request of US President Donald Trump, who had repeatedly criticized the deal, saying that it was putting the United States at a disadvantage. Trump wanted to withdraw from the agreement, but thanks to the joint efforts of Mexico and Canada, new agreements were reached.

The new United States-Mexico-Canada Agreement (USMCA), or T-MEC, as it is called in Mexico, is being signed by Pena Nieto at the G20 summit, but its final approval or rejection will be decided by the Mexican parliament under the new president.

It is impossible to talk about positive changes in the Mexican economy without mentioning the negative aspects that accompanied Pena Nieto's six years in office, and the main one is the catastrophic drop in the level of safety and resulting spike in crime rates nationwide.

Pena Nieto does, however, have something to brag about with regard to crime: the previously elusive drug trafficker and head of the powerful Sinaloa cartel Joaquin, "El Chapo" Guzman (whose nickname means "Shorty"), was caught twice during the president's term. El Chapo was later extradited to the United States, where his trial has already begun. The leaders of many other drug cartels operating in the Latin American country have either been killed or detained, but in general, this did not improve the situation.

© AP Photo / Maximo Musielik
Employment, Medical Care, Education: Pena Nieto Announces Migrant Aid Plan
The war against the drug mafia began in Mexico in 2006 under Calderon, but now Lopez Obrador will have to resolve the situation. So far, the new authorities have no plans to withdraw the army from city streets, since Mexicans have great confidence in this security force. According to expert estimates, the total number of victims of the drug war in the last 12 years could be around 200,000 people.

The crime epidemic is felt even in those parts of Mexico that are traditionally calm. The number of robberies in the prosperous regions of Mexico City has even increased, and the state as Guanajuato, which was almost never seen in criminal reports, is constantly mentioned in this context now.

One of the saddest pages in the history of the relationship between the Mexican state and the drug mafia is the story of the abduction and subsequent murder of 43 students from the city of Ayotzinapa. The tragedy occurred in September 2014 due to corruption among police officials and the leadership of the city of Iguala, where students were detained by the police and handed over to the criminals who brutally killed them and destroyed their bodies in a garbage dump.

This tragedy became the first serious challenge for Pena Nieto, with the second one being when El Chapo escaped from prison in 2015 and went on the run for half a year until his final capture. To his credit, Pena Nieto did put everyone involved in the abduction on their toes, and more than 100 people, including the former mayor of Iguala and numerous police officers, were detained as a result.

The relatives of the abductees did not, however, believe the results of the official investigation and demanded that it be resumed. And they succeeded. Incoming President Lopez Obrador intends to sign a decree creating a commission to investigate the Ayotzinapa case as soon as on Monday.

In general, the results of the fight against drug cartel leaders and corrupt police have been slight so far, and security in Mexico is relative. In addition, the problem with migrants who use Mexico as a transit country on their way to the United States has not helped the security situation, since many of these people settle in Mexico due to Washington's tough immigration policies.