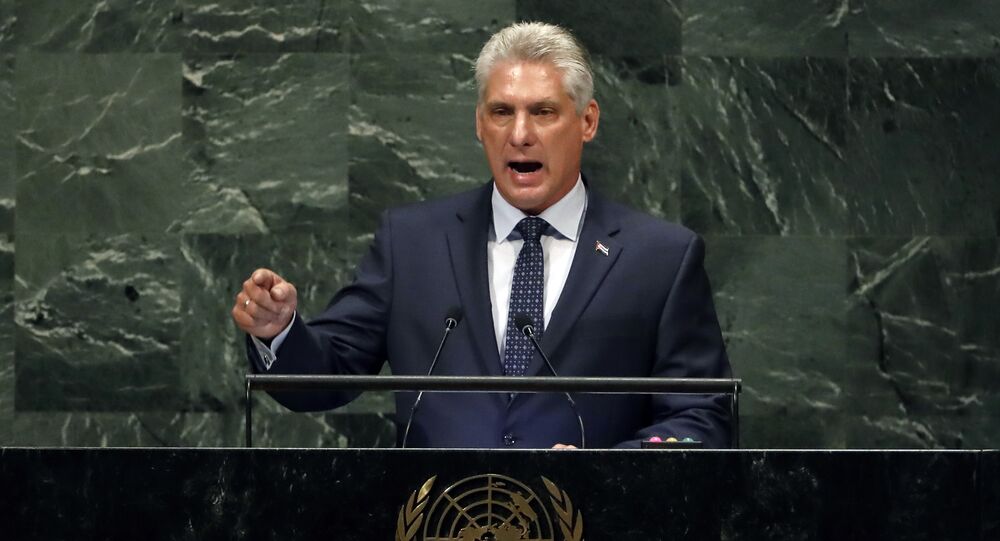 189 out of 193 UNGA member-states approved a resolution by a landslide which condemned the American economic blockade against Cuba, with Cuban foreign minister Bruno Rodriguez denouncing the embargo as a "massive violation of human rights".

While the vote is nonbinding, it reflects the opinion of the international community, DW reports.

The US and Israel were the only countries to vote "no" while Ukraine and Moldova abstained.

US ambassador to the UN Nikki Haley and several others took turns criticizing Cuba's human rights record, with Ambassador Haley stating that "our reason for the embargo is and has always been Cuba's denial of freedom and the denial of the most basic human rights for the Cuban people" and urged the UNGA to "send a moral message to the Cuban dictatorship".

© Sputnik / Pavel Lisitsyn
Russia to Provide Cuba With Weapons Worth Over $50 Mln – Reports
Haley also ridiculed the vote, which has taken place annually since 1992, by calling it a "waste of time for all".

However, most UN representatives sided with the Cuban government with their historically united vote, with Cuban FM Rodriguez slamming the US "cruel policy" of detaining migrants and lambasting the Trump administration as having the "lowest moral authority" to comment on human rights.

Rodriguez also slammed the illegal embargo as "a flagrant, massive and systematic violation of the human rights of Cuban men and women".

The Kennedy administration began enforcing the embargo against Cuba after 1960, when then-Cuban prime minister Fidel Castro nationalized US assets in defiance of threats and subversion.

Rob Miller, director of the London-based Cuba Solidarity Campaign, told Sputnik that he welcomed the near-unanimous vote against the illegal Cuban blockade "which continues to cause immense suffering to the Cuban people" and affected all aspects of Cuba's development, "including health, education and social provision."

"This is the longest running blockade in history outside of actual wartime," Miller stated, adding that it indiscriminately impacted "the Cuban people and is rightly opposed across the globe."

Miller also said that the international community voted widely in favor of Cubans despite efforts from the Trump administration to coerce third countries into abstaining or opposing the resolution.

Miller added that the United States had isolated itself on the resolution matter and urged "countries to move forward in their relations with Cuba and to stand firm in the face of US extraterritorial threats against their companies and individuals".

© Sputnik / Roman Mahmutov
UN General Assembly Adopts Resolution to Lift US Trade Embargo On Cuba
"The US policy is extraterritorial and a long list of British companies, including banks, have been threatened with and fined large sums by the US Office of Foreign Asset Control for trading with Cuba," he stressed, adding the blockades effects were wide reaching and that the Cooperative Bank had also shut down his organization's bank accounts "as a direct impact of the blockade."

"Bank transfers to Cuba are hindered by the blockade, including over £80,000 raised by our members and affiliated organizations to help the Cuban people recover from the impact of the recent Hurricane Irma," Mr. Miller noted.

He also welcomed the United Kingdom's continued "opposition to the extraterritorial US blockade" and continued to "support efforts for better trade and understanding between Cuba, Britain and the rest of the world," he concluded.