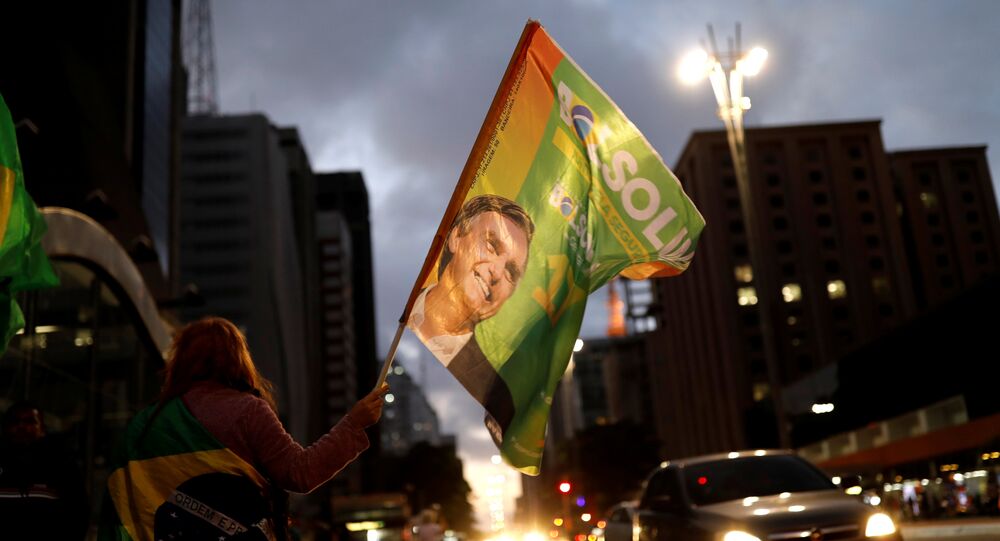 In a post-election victory speech, Jair Bolsonaro vowed to govern "following the Bible and the constitution," and promised to defend "the constitution, democracy and freedom" in Brazil.

"This is not the promise of a party, nor the word of a man. It is an oath before God," Bolsonaro told supporters.

He also added that Brazil "cannot continue flirting with socialism, communism, populism and the extremism of the left."

Bolsonaro has vowed to downsize the country's federal government, tackle bureaucracy and make streets safer during his term.

“I believe in the people of Brazil and hope that together we can create a better future. And this future will also be created by the government, which will provide conditions for the growth of all. And this means that the federal government will be reduced, with regards to its structure and bureaucracy,” Bolsonaro said, adding that the government will “break bureaucratic obstacles and provide entrepreneurs with greater freedom,” as quoted by the broadcaster Globo.

© REUTERS / Ricardo Moraes
Jair Bolsonaro Wins Brazil Presidential Race - Early Results
The president-elect also pledged to make streets safer so that Brazilian citizens aren't afraid to "go outside." At the same time, Haddad, who was Bolsonaro’s main rival in the race, said that he will join opposition.

Earlier in the day, Brazil's Superior Electoral Court said that Bolsonaro from the right-wing Social Liberal Party has won the race after receiving 55.5 percent of votes with 99.4 percent of ballots counted. Fernando Haddad from the leftist Workers’ Party came in second with 44.4 percent, according to the results.

“I just have congratulated President-elect Jair Bolsonaro on his historic victory achieved today. After the elections, it is time for all of us to work together for Brazil, ” Temer wrote on Twitter.

“Talked with President-elect Jair Bolsonaro. I asked him to keep the enthusiasm that he has, not only when he spoke to me, but also when he spoke today of the search for the unity of the country, its tranquility and harmony. I told him that from tomorrow we will begin the transfer of power,” Temer wrote on Twitter.

Temer also said that he would start transferring power to President-elect Bolsonaro on Monday.

© REUTERS / Sergio Moraes
'Bolsonaro Could Become Brazil's First Social Media President' – Professor
The White House said that US President Donald Trump had called Bolsonaro on Sunday to congratulate him on his victory and both politicians expressed a strong commitment to work together.

Trump and Bolsonaro agreed to "work side-by-side to improve the lives of the people of the United States and Brazil, and as regional leaders, of the Americas," White House spokeswoman Sarah Sanders said in a statement.

Former paratrooper Jair Bolsonaro has repeatedly compared himself to Donald Trump; during his political career he has been a member of nine political parties. Seen in the country as a controversial politician, Bolsonaro has earned himself the nicknames "Brazilian Trump" and "Tropical Trump."

The politician has been critical of the nation's LGBT community and is known for his sexist remarks, as he said women were unworthy of equal pay. He later retracted this claim, citing a misunderstanding. Bolsonaro was reportedly ordered to pay a Brazilian congresswoman over $2,500 in compensation after telling her she was not "worth raping."

© REUTERS / Ueslei Marcelino
Brazil's Temer Says Not Afraid of Arrest Over Corruption Charges
Bolsonaro has also expressed support for loosening gun control laws. The politician has promised to move Brazil's Embassy in Israel from Tel Aviv to Jerusalem and withdraw his country from the Paris climate agreement. He has also been critical of the United Nations and its institutions.

He was stabbed in the stomach in early September while campaigning in the town of Juiz de Fora.

Bolsonaro is in favor of the conclusion of new international trade agreements and the reduction of tariffs on imports of goods into Brazil.

The president-elect will assume office on January 1, 2019, for a term lasting four years.