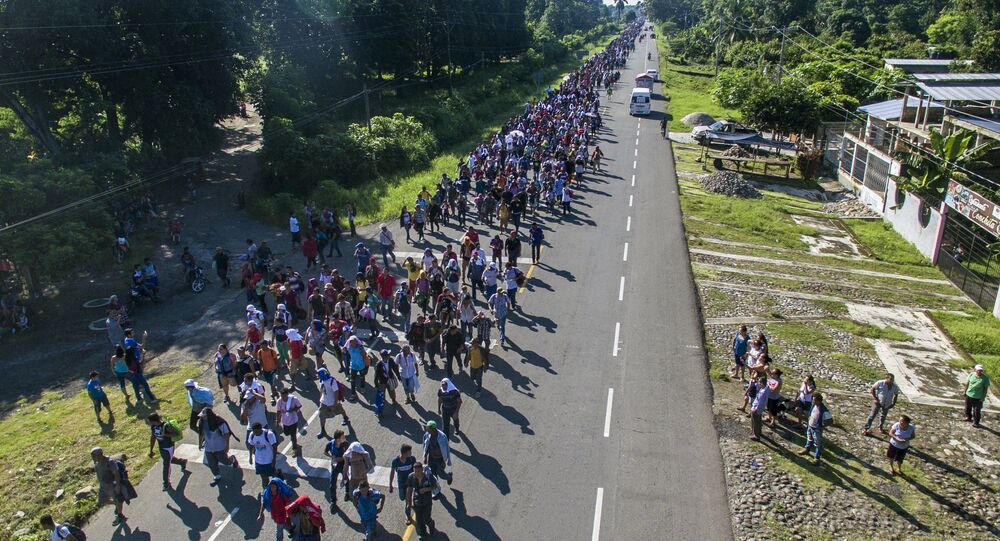 Guatemala's migration agency confirmed that an additional 1,000 migrants crossed the border from Honduras on Sunday, joining the migrant caravan on the Mexican border.

The migrants, who began their trip in Central American countries, stopped in Tapachula, a city in the Mexican state of Chiapas, the Associated Press reported.

The number of migrants on the Mexican side of the Mexico-Guatemala border reached 2,000, however, it is uncertain where they originated, as the Mexican government ordered police to close the border for those who do not have the required documentation. Hundreds of migrants have reportedly applied for refugee status in Mexico in Ciudad Hidalgo.

Mexican federal police have monitored the caravan’s progress from helicopters and have escorted it as well. Mexican authorities refused to allow the caravan entry from Guatemala, accepting small groups to process asylum requests instead, monitored by police units, and handing out a limited number of 45-day visitor permits.

Mexico’s Interior Department said in a statement that federal and Chiapas state authorities were providing assistance to migrants, including legal counseling for those who applied for asylum.

The US president, Donald Trump, reacted on Twitter, saying that “people have to apply for asylum in Mexico first, and if they fail to do that, the U.S. will turn them away.” He also blamed his political opponents of the Democratic Party, saying that immigration laws should be changed.

Full efforts are being made to stop the onslaught of illegal aliens from crossing our Souther Border. People have to apply for asylum in Mexico first, and if they fail to do that, the U.S. will turn them away. The courts are asking the U.S. to do things that are not doable!

The Caravans are a disgrace to the Democrat Party. Change the immigration laws NOW!

Trump thanked Mexico earlier this week during a political rally to drum up support among his base for the upcoming midterm elections, tweeting that the “[US] appreciate what Mexico is doing. They’ve really stepped up, and it will not be forgotten.” He repeatedly threatened that he would deploy US troops to the US-Mexican border to stop the progress of the caravan.

“In this way, we confront the phenomenon of migration, because he who leaves his town does not leave for pleasure but out of necessity,” he added.

US Department of Homeland Security Secretary Kirstjen Nielsen noted that her agency is monitoring the caravan while going so far as to suggest that the migrant movement can serve as a cover for transnational criminal organizations.

“We shall work with our partners in the region to investigate and prosecute to the fullest extent of the law all who seek to encourage and profit from irregular migration,” she said.

“We fully support the efforts of Guatemala, Honduras, and Mexico, as they seek to address this critical situation and ensure a safer and more secure region,” she added.