MEXICO CITY (Sputnik) – The Brazilian Workers' Party, whose nominee Fernando Haddad will participate in the upcoming presidential run-off, filed a complaint with the Supreme Electoral Court asking it to remove front-runner Jair Bolsonaro from the election over a Whatsapp campaign carried out by his business supporters, local media reported.

Brazil media outlets reported on Thursday that businessmen close to Bolsonaro had concluded contracts with high-tech companies to spread hundreds of thousands of messages via the Whatsapp application, which might have affected the results of the first round of the presidential vote.

"This demonstrates the clear practice of abuse of financial capabilities in order to create the unbalance of forces at the election," the complaint read, as quoted by the UOL news outlet. 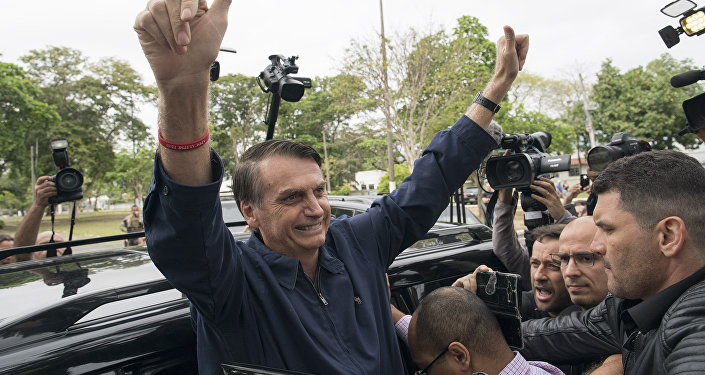 The party also asked the court to prohibit Bolsonaro from holding elected office for eight years.

Bolsonaro, in his turn, denied any involvement in the reported violation.

"I cannot control an entrepreneur who does this because of his sympathy to me. I know that this violates the law but I cannot learn about it [in advance] and take measures [to prevent it]," Bolsonaro said, as quoted by the Antagonista news outlet.

The first round of the presidential election was held in Brazil on October 7. Bolsonaro received 46.03 percent of the votes while his rival Fernando Haddad got 29.28 percent of the ballots.