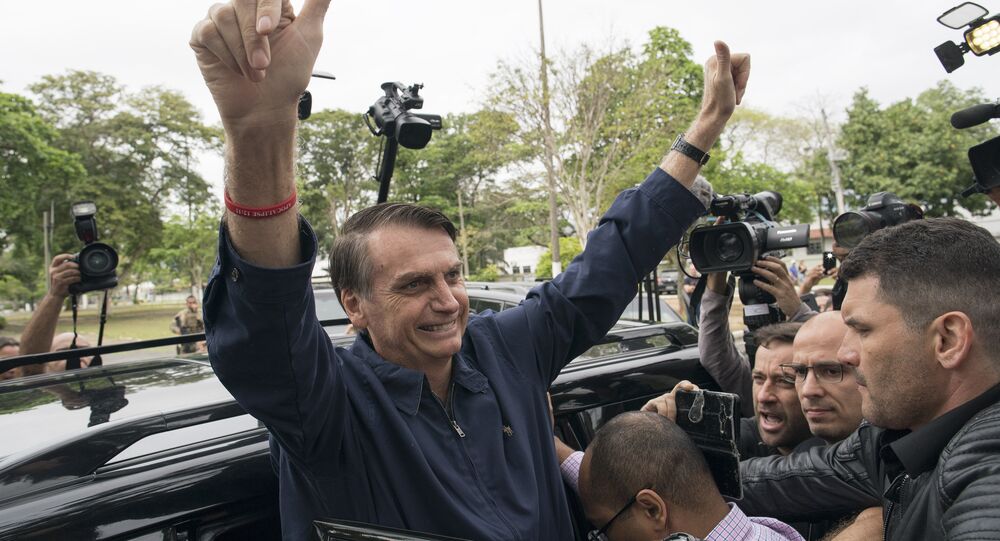 RIO DE JANEIRO (Sputnik) - Brazil’s presidential hopeful Jair Bolsonaro called on his supporters on Monday to come out in force at the runoff on October 28 vote after falling short of an outright victory.

"I will continue to mobilize the population up until October 28. I believe in you and you believe in Brazil. We will stick together until we change our country, until we win," he said in a televised speech.

Bolsonaro rally is already turning into a street party. Music blasting, beers for sale. It stopped this car and the driver climbed out to dance. #Brazil #tictocnews pic.twitter.com/N3V8EbWDsb

"We have a responsibility to show what we can do… We don’t want to give away our legacy. We must change the fate of new generations," he told his supporters.

Jair Bolsonaro also said Monday that a lot of voters complained about voting machines. “There were a lot of complaints,” he said in an address posted on his Facebook page.

Elderly voters, he added, were often discouraged from voting by long waiting lines, including in Rio de Janeiro.

Meanwhile, Bolsonaro's opponent Fernando Haddad warned Monday that the nation's democracy was in danger after an inconclusive Sunday vote.

"The results of the first round present a challenge, in that they expose the risks faced by democracy in Brazil," he told supporters in a televised address.

READ MORE: Over 130 People Detained in Brazil Due to Election-Related Violations

With 99 percent of returns in, Haddad of the Workers' Party is trailing his rival, having obtained 28 percent of the vote. Jair Bolsonaro is leading with 46 percent.

Both candidates fell short of the 50 percent needed to win the election and will face off on October 28. Haddad said the second round was an opportunity to unite Brazil's democrats.