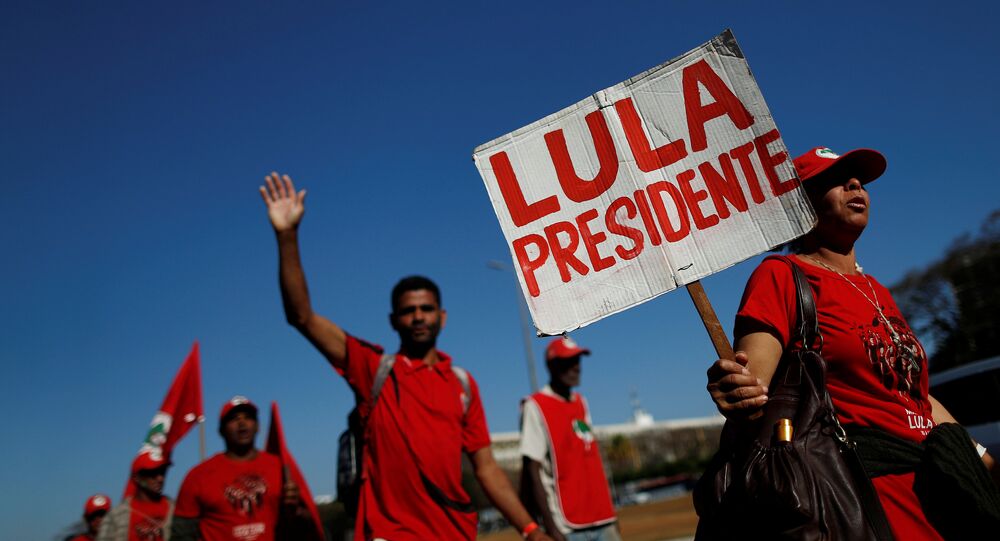 MEXICO CITY (Sputnik) - Papers were submitted to Brazil’s Supreme Court hours before the Wednesday deadline passed. The court is expected to issue a ruling on whether he can run, the Brazilian Workers’ Party (PT) said in a statement on Wednesday.

"It’s official! Lula is the Workers’ Party candidate for presidency," the party said in a statement on its website on Wednesday.

The 72-year-old ex-Brazilian president began serving his 12-year prison sentence in April on charges of accepting a luxury apartment as a bribe from a construction firm in return for concessions, a claim he denied. Lula da Silva served as president from 2003 to 2010 and remains very popular.

© REUTERS / Ueslei Marcelino
Brazil Prosecutors Ask Appeals Court to Keep Ex-President Silva Jailed - Reports
Under the Latin American nation’s law, a person serving a prison term cannot be nominated for presidency. However, Lula has repeatedly voiced his plans to run in the election.

According to the opinion polls, Lula da Silva is one of the most popular presidential hopefuls. PT's lawmaker Paulo Teixeira told Sputnik in April that former Brazilian president would run his campaign from prison if needed.