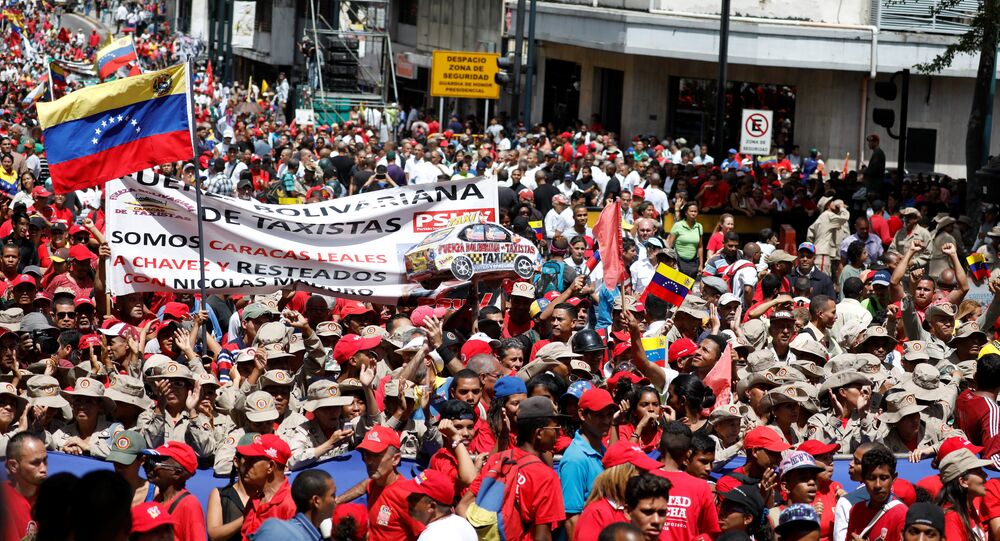 MEXICO CITY (Sputnik) – Thousands took to streets of the Venezuelan capital of Caracas on Monday in support for President Nicolas Maduro, who faced an alleged failed assassination attempt over the weekend.

According to the Venezuelan authorities, Maduro faced a failed assassination attempt with use of explosive-carrying drones during his address at a military parade in Caracas on Saturday. Maduro was unharmed, but seven soldiers were injured.

The march began in the center of the city from where the demonstrators would head to the Miraflores Palace, the official workplace of the president, the Venezuelan state TV reported.

© AFP 2020 / Juan Barreto
WATCH: Video of Assassination Drone that Targeted Maduro Exploding
Music groups, chanting slogans "For Maduro," are performing during the rally, according to the broadcaster.

The Venezuelan National Movement of Soldiers in T-shirts claimed the responsibility for the assassination attempt on Maduro.

The president accused opposition forces, and Colombia, adding that some of the assassination perpetrators resided in the United States. Both Bogota and Washington denied any involvement in the incident.

The Venezuelan authorities said on Sunday that they had detained six people as part of the investigation into the attack.

READ MORE: US Not Involved in Maduro Assassination Attempt: Bolton

Venezuela has seen facing an acute economic crisis recently. The situation in the country prompted large-scale protests in 2017 against the government of Maduro. However, Maduro was re-elected as the Venezuelan president last May.

From Maduro to Saakashvili: Top 10 Attacks on World Leaders Caught on Camera