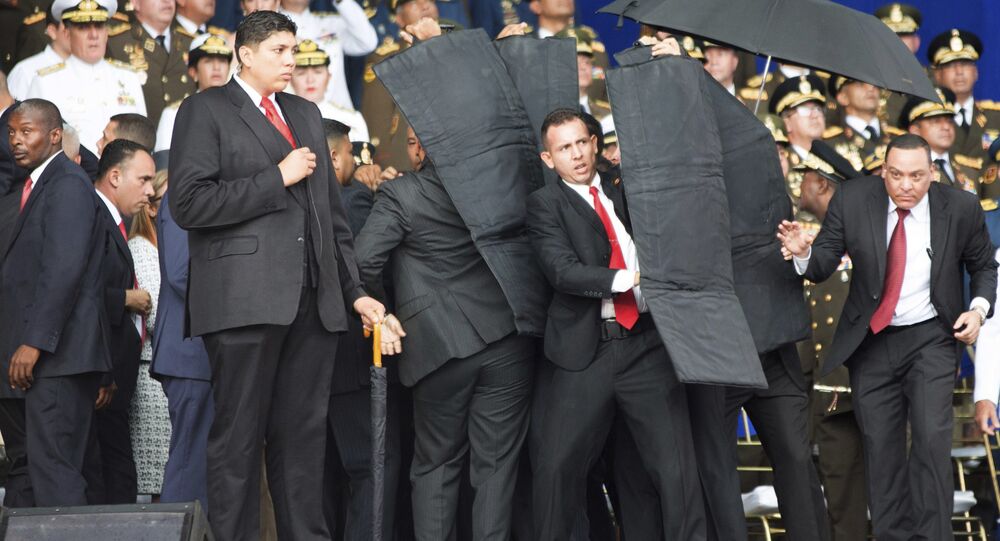 News about an alleged attack on Venezuela's President in Caracas rocked the media on Saturday, tying Venezuelan rebels, right-wing foes, the Colombian government, ill-wishers in Florida and a gas tank accident into one complicated knot.

On Saturday night, Venezuelan President Nicolas Maduro survived what government officials in Caracas are calling an assassination attempt. During a military event in the country's capital, a nearby explosion interrupted Maduro's televised speech, leaving seven people injured. The head of state was unscathed following the alleged attack, which spawned a few speculations about what happened in Caracas during his address.

Maduro Points at the Suspects

Two hours after the incident, Maduro, who leads the ruling Socialist Party, appeared on TV to accuse his "ultra-right wing" opponents in Venezuela of what he called a failed drone assassination attempt.

"That drone was coming for me but there was a shield of love. I am sure I will live for many more years," he said, adding that the initial investigation points to links to Colombia and its President Juan Manuel Santos in particular, as well as Florida-based financiers.

His comments mirrored those of his Information Minister Jorge Rodriguez, who claimed that several drones loaded with explosive charges detonated near the presidential platform.

Bogota dismissed the allegations as "absurd and groundless," lamenting that the Venezuelan leader blames Colombia in any situation.

After reports about the incident hit the newswire, a Venezuelan rebel movement called the Flannel Soldiers claimed responsibility for the attempted attack in a Twitter post. According to their statement, two drones loaded with C-4 explosive were meant to detonate near the presidential tribune, but Maduro's snipers shot them down before they hit the president.

Blowing It All out of Proportion?

The government's version of the story was disputed by Ex-Military Aide to the Venezuelan government Anthony Daquin, who told local broadcaster NTN24 that a gas tank exploded in Caracas during the presidential event, adding that its venue was previously declared a no-fly zone for any aerial vehicles or aircraft. The drones spotted near the stage with Nicolas Maduro were operated by the Venezuelan authorities, he stressed.

His remarks were echoed by three unnamed Venezuelan firefighters, who told the Associated Press that a gas tank did explode inside an apartment. Later on, images emerged on social media, showing smoke coming out of a building window at the site of the incident.

Whoever was behind the attack, a gas tank or anti-Maduro rebels, it is unlikely that Maduro staged the incident for political gain, believes David Smilde, a senior fellow at the Washington Office on Latin America and a Venezuela expert.

However, he claims, the Venezuelan leader would take advantage of it to concentrate power. "Whoever did this, he'll use it to further restrict liberty and purge the government and armed forces," he said, as quoted by the Associated Press.

Social media users have been voicing controversial opinions, with some blaming the US CIA and Israel's Mossad.

Assassination attempt by CIA and Mossad

Trump and CIA work for bug oil…and big oil is still pissed about nationalization of the oil industry there.

Others were more skeptical, however, believing that there was a "staged propaganda event".

Looks a bit staged to me, pretence to do a Turkey and start killing opponents. Corbyn would be impressed

More likely it was a staged propaganda event. To give impression of external enemies!

I’ve got to be honest, it looks a bit staged to me. If true though, wouldn’t be a surprise after what he has put his country through.

In 2013, Nicolas Maduro succeeded President Hugo Chavez, who himself was removed from power for almost two days as a result of the April 2002 failed military coup.

A proponent of tough economic policies, Maduro has been facing opposition-led anti-government protests since 2014. Maduro's opponents accuse him of mismanaging the oil-rich country, causing severe shortages of basic consumer goods, and attempts to sidestep the parliament.

The reported assassination attempt was strongly condemned by Russia, which condemned the use of terrorist means to pursue political agendas. "It is obvious that these actions are aimed at destabilizing the situation in the country after the recent congress of the United Socialist Party of Venezuela, which had determined the priorities in restoring the country's economy," Russia's Ministry of Foreign Affairs said in a statement on Sunday, expressing solidarity with Venezuelans.