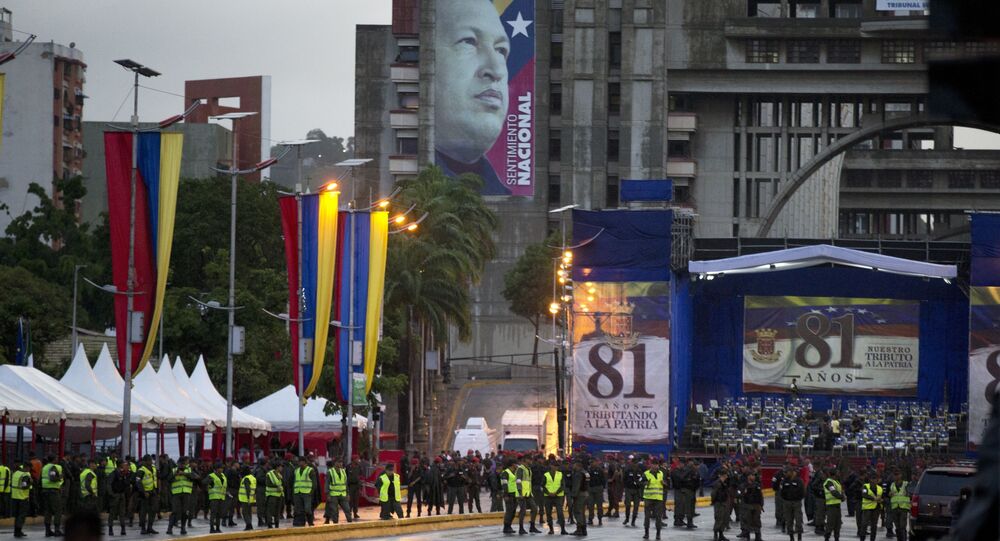 MEXICO CITY (Sputnik) - Bolivian President Evo Morales condemned the attack on Venezuelan President Nicolas Maduro on Sunday, claiming that the United States and its allies are behind the failed attempt of assassination.

“We vigorously condemn this new aggression and a cowardly attack on President Nicolas Maduro and the Bolivar nation. After the failure of their attempts to overthrow him democratically, economically, politically and militarily, now the empire [the United States] and their servants have threatened his life,” Morales wrote on Twitter.

© AP Photo / Xinhua
WATCH: The Moment of Attempted Assassination of Venezuela’s Maduro Up Close
Earlier in the day, Maduro said that he was attacked by several drones loaded with explosives during his address at a public event in Caracas. The president and the officials, who were present at the demonstration, were unhurt in the incident. However, a total of seven servicemen were injured in the attack, according to Venezuelan Information Minister Jorge Rodriguez.

The Venezuelan president accused the country’s right-wing forces as well as their Colombian counterparts under President Juan Manuel Santos of staging the attack on him.

Maduro also said that some organizers of the attack have already been caught, while the others are living in the United States and asked his US counterpart Donald Trump to help Venezuela in bringing the suspects to justice.

According to the agency, there was an explosion of a gas cylinder at an apartment near the military parade, where Maduro was present, rather that the attack of drones as the official Caracas says. The smoke from a gas explosion coming from the windows of the building was visible, the firefighters said.