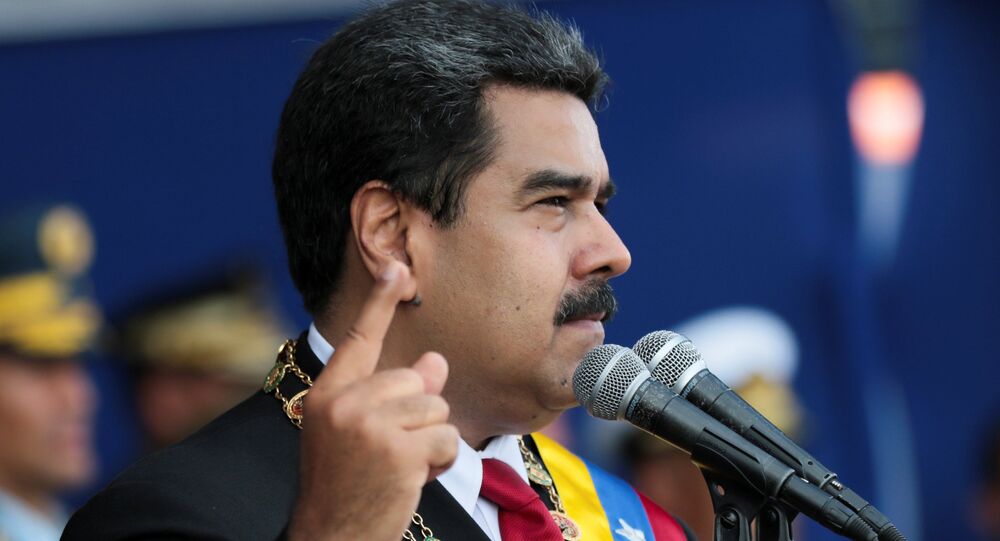 According to Venezuelan President Nicolas Maduro, some of those responsible for organizing the failed assassination attempt have been detained.

"The investigation was launched immediately, it has already moved forward, some organizers of the assassination have already been detained," Maduro, exhibiting no visible signs of stress, said in his first address to the nation after a failed attempt to assassinate him.

© AP Photo / Xinhua
WATCH: The Moment of Attempted Assassination of Venezuela’s Maduro Up Close
"We will hold accountable those responsible, who live abroad, especially in the United States. According to the preliminary findings, many of the organizers of the assassination are living in the United States, in the state of Florida. I hope that the government of Donald Trump will be ready to fight the terrorist groups that commit attempts against peaceful countries, in our case — Venezuela," the president of the South American nation emphasized.

Particularly, Maduro accused Colombian right-wing forces of being behind a Saturday attack on him using explosives-laden drones, claiming that the assassination was plotted with the blessing of Colombian President Juan Manuel Santos.

"It was an attack to kill me, they tried to assassinate me today," Maduro said in a televised address. "I have no doubt that the name Juan Manuel Santos is behind this attack."

The Venezuelan president asserted that he survived the assassination attempt as a result of the combines energies of his God, the Venezualen people and the country's armed forces.

© REUTERS / Venezuelan gov't handout
Maduro TV Address Interrupted by Drone Assassination Attempt (VIDEO)
"That drone was coming for me but there was a shield of love," Maduro said, cited by Reuters. "I am sure I will live for many more years."

Earlier in the day, several drones loaded with explosives targeted the stage where Maduro had been giving a speech. A total of seven servicemen were injured in the attack.

Venezuela is mired in a deep political and socioeconomic crisis which many blame on dropping oil prices as well as leadership decisions. In May, Maduro was reelected president with some 68 percent of the vote. A number of countries, including the United States, Argentina, Spain, Germany, and the United Kingdom characterized the vote as unfair and illegitimate.