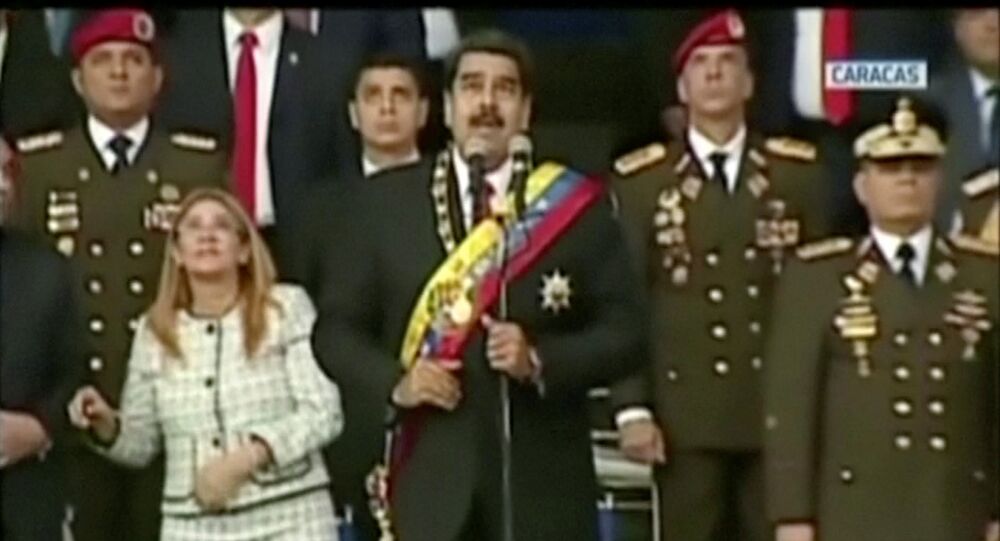 A televised address by Venezuelan President Nicolas Maduro was cut short during a speech at a military event on Saturday and soldiers were seen running before the TV transmission was cut off.

A military demonstration in Venezuela was abruptly interrupted on Saturday after an alleged assassination attempt on Venezuelan President Nicolas Maduro, according to video of the leaders' televised address.

As documented on video, Maduro was delivering his speech when he and those around him onstage suddenly looked up as participants in the military demonstration rushed from the scene, according to several Venezuelan media outlets with access to the footage

According to NTN24 broadcaster, the assassination attempt on Maduro was alleged to have been committed with the use of a drone filled with C-4 explosives.

"Yes, the assassination has presumably happened, but it turned out to be unsuccessful," a source said.

According to local media reports, Maduro was not injured and was evacuated from the scene. According to Reuters, at least seven national guard soldiers were injured.

Local police downed a drone that attacked the scene where officials, including Maduro, were present.

According to Venezuela's Minister of Information, not one, but several, drones allegedly fitted with explosives attacked the country's leadership during a military parade.

Meanwhile, local media outlets report that some explosive-carrying drones failed to reach their targets, crashing in a residential area in the center of Caracas, causing fire and large plumes of smoke.

#Venezuela 🇻🇪: a building is on fire in downtown #Caracas, close to where #Maduro gave his speech pic.twitter.com/m9lORNbk8l

#Venezuela Fire in a building in #Caracas, possibly after the drone that aimed to kill Maduro crashed pic.twitter.com/nDzNVnwJ78

The Venezuelan leader as well as the rest of the political and military leadership of the Latin American country feel fine and were not injured during the attack, according to the president of a state-owned bank Miguel Perez Abad.

"Soon, our national government will inform about what happened on the Bolivar avenue … Our President Nicolas Maduro feels fine as well as the supreme political and military command of the revolution," Perez Abad wrote on Twitter.

© REUTERS / Miraflores Palace
Maduro Accuses Colombian Right-Wing Forces of Seeking Violence in Venezuela
Venezuela has been recently mired a political and socioeconomic crisis, which many blame on dropping oil prices as well as the leadership’s decisions. The nation experienced months of mass protests last year, which initially were a response to the Supreme Court’s decision to severely limit the parliament's legislative powers.

The protests in Venezuela  were further fueled by the election of a new lawmaking body, known as the Constituent Assembly, initiated by Maduro with the aim of rewriting the constitution.