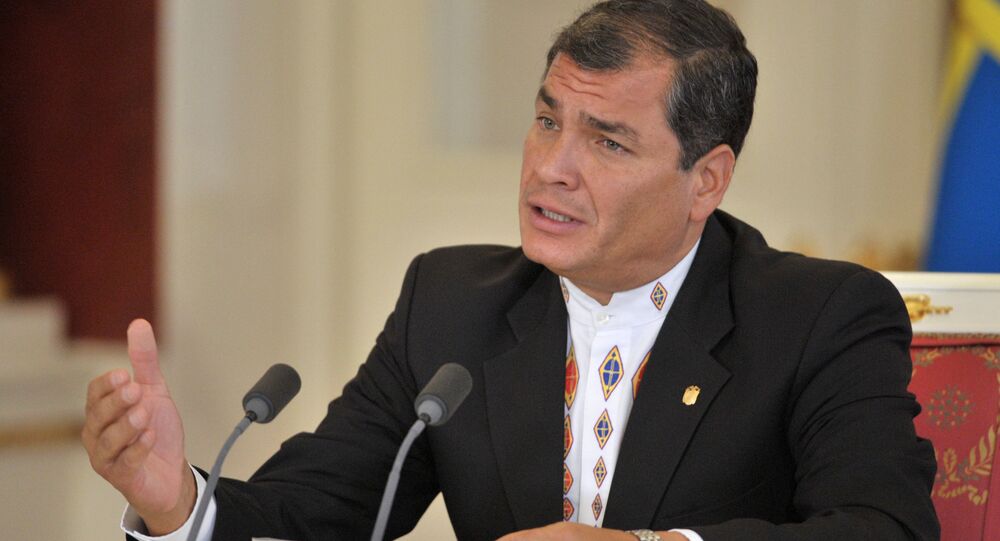 According to AFP, an Ecuador court on Tuesday ordered the arrest of Belgium-based former President Rafael Correa on charges connected to the alleged kidnapping of a political opponent in Colombia.

In June, an Ecuadorian Prosecutor's Office said that a court ruled to engage Correa in an investigation into former lawmaker Fernando Balda's kidnapping in 2012 in Colombia. Correa was reportedly ordered to appear in court every two weeks to assist the investigation.

According to AFP, three police intelligence agents have already been ordered arrested in the case, in addition to an ex-police chief and a former top intelligence official, the latter of whom was reportedly arrested last month in Spain.

© Sputnik / Alexsey Nichukchin
Sitting Ecuador Leader Correa Rules Out Run-Off in Presidential Vote
Meanwhile, Correa stressed recently that he had no knowledge of the crime. "I do not know what they are linking me with, or to whom," he was quoted as saying by AFP, adding, "Maybe they can get some false testimony. But they'll never prove anything, because there is nothing."

Correa served as the 43th president of Ecuador between 2007 and 2017. He is also a founder of the PAIS Alliance left-wing political party.

The investigation into Balda's kidnapping was launched in January. In March, two Ecuadorian intelligence agents were detained over possible involvement in the kidnapping.

According to the Comercio news portal, the verdict has been delivered by judge Daniela Camacho on an application by the public prosecutor, who demanded Correa's pre-trial detention over his failure to appear in court from time to time as part of the Balda's case.

The judge has also demanded that the International Criminal Police Organization (Interpol) should be notified for Correa's apprehension and extradition.

Correa is currently in Belgium, where his family has resided for a long time. In mid-June, he was engaged in the investigation by an Ecuadorian court's ruling.

Ecuador ‘Has Got to Show Independence’, Keep Assange Out of US Hands