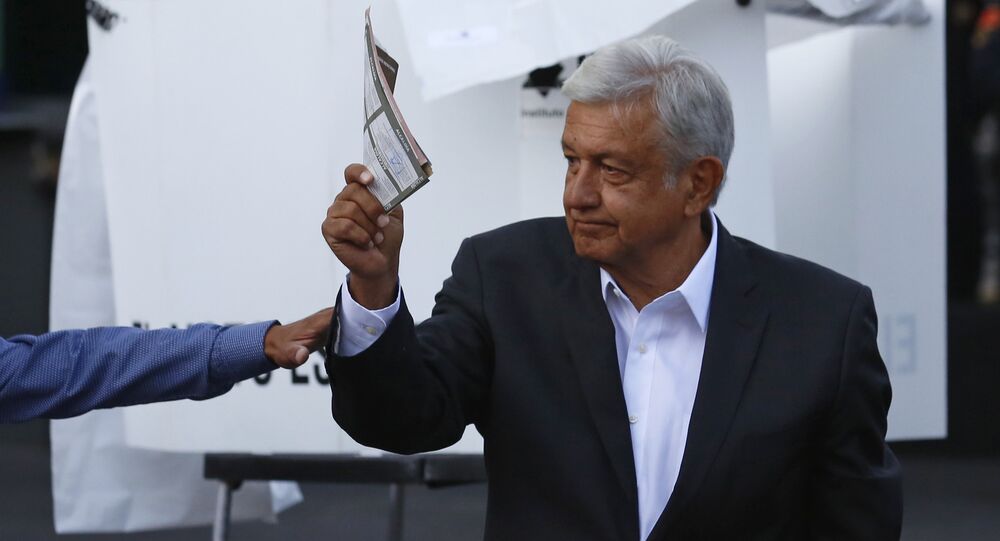 Elections have always been a dirty business: attack ads, sabotage, insinuation and fear mongering run amok as a nation prepares to decide its new leader and its new government. And if you ask US liberals, the problem has worsened worldwide since the 2016 election in America, it’s all Russia’s fault and Mexico is the latest victim.

The list of countries whose elections Russia has ostensibly manipulated is long but distinguished, but everybody's list is different. Since invading US social media during the 2016 election with Jesus memes and coloring books, Russia has used fake news, bots and cyber intrusion — just a few items in their election meddling toolbag — in Bulgaria, Austria, Norway, Netherlands, France, Germany and the UK, according to Newsweek. If you ask The Hill, 18 countries were meddled in during 2016 alone.

Or ask the Alliance for Securing Democracy (ASD), a sort of anti-Russian meddling task force started by former Project for a New American Century neoconservative and Iraq War architect Bill Kristol, alongside a "who's who of former senior national security officials," according to the Washington Post. ASD claims Russia has meddled in a whopping 27 European and North American countries since 2004. In 2016, that included Montenegro, Italy, Portugal and the US. In 2017: Canada, Denmark, Czech Republic and Moldova.

Canada, astute US readers will quickly realize, blocks the US completely on its northern border. Now, they may be totally doomed, as "Resistance" Twitter has reached the horrifying conclusion that Russia interfered to help sway the Mexican elections on Sunday in favor of populist candidate Andrés Manuel López Obrador.

If The Resistance is to be believed, Russia has taken over pretty much the entire North American continent. That's more land in just two years than the Soviet Union turned red in its 74 years.

Resistance poster extraordinaire Molly McKew, a lobbyist who calls herself an "information warfare expert" tweeted Monday morning about Mexico's elections of the night prior, saying that it is "worth remembering that [López Obrador] likely received media/info ops support from Russia + Russian $ coming through several means," adding the warning that "our enemies [are] working to rearrange our neighborhood."

Of course, any casual observer of Mexico's politics would note that López Obrador isn't some one-time politician from the outside: he has a long history of governing in Mexico and voters know his name well. He was the head of government of Mexico City from 2000 to 2005 before running for president in 2006, losing by less than a single percentage point amid claims of election fraud. He came in second place in the 2012 election, losing to outgoing president Enrique Peña Nieto and fraud was also alleged.

Though López Obrador presents himself as a reformer seeking to divorce Mexico's political and oligarchical classes, he has been a mainstream figure in Mexican politics for over a decade.

Clearly López Obrador isn't the kind of "anti-institution" candidate McKew seems to think. "Everything is broken, vote against it," is how McKew characterized López Obrador's message. "Sound familiar?" she asked rhetorically.

Since 2007, a year after López Obrador's initial loss, Mexico has seen massive political violence that has resulted in the deaths of 200,000 people, Sputnik News reported Friday. Even young people have been subject to such violence. In 2014, 43 students from the Ayotzinapa Rural Teachers' College in Iguala were famously disappeared after, it is believed, police arrested them and handed them over to a crime syndicate.

But if you ask McKew, those who really wanted to "disrupt" the system in Mexico were not voters fed up with rampant violence and corruption, but the Russian Federation as a part of some nefarious global plot.

Of course, more reasonable-minded social media users took exception to this analysis. "Not just peddling conspiracy theories, but also erasing the voices of 18 million Mexican voters," one user replied. Others accused her of McCarthyism and paranoia, asking her whether she checks for "Red under your bed."

"When you are running a high fever, watching a James Bond film, and know nothing about Mexico," another speculated as possible influences on McKew's ideas.

But McKew is far from the only voice to raise such alarms over Russian interference in Mexico's elections — a number of US officials, two of whom who have since been sacked, have done the same. It's an issue mainstream media won't drop, with a number of outlets giving the potential solemn assessments or uneasy op-eds.

In December, then-National Security Adviser HR McMaster warned in a speech at a terrorism conference that there were "initial signs" of Russian meddling in the Mexican elections.

In January, US Senator Ben Cardin (D-MD) published a 206-page report on Russian President Vladimir Putin's "Assault on Democracy," blaming Sputnik News and RT for spreading fake news. In February, speaking to the Miami Herald about the report, Cardin said, "We would expect to see [Russian interference] in Mexico and other countries in the hemisphere," and that Putin "would like to have a government in Mexico that is not friendly to the United States."

And in February, then-Secretary of State Rex Tillerson said in a speech in Mexico City that "European counterparts" had reported Russian fingerprints on a number of their elections. "My advice would be… pay attention to what's happening," he told a crowd in the country's capital.

López Obrador laughed off such claims in January, posting a video to Twitter of himself standing in front of a port, saying that he was waiting to start a tour. "I'm taking advantage of the time," he said. "I'm standing here waiting for the Russian submarine," he continued, looking at the ocean, "It will be bringing me Moscow's gold."

He said he's no longer called by his nickname, but instead, "Andres Manuelovich."

The Washington Post quickly countered with an op-ed declaring, "The prospect of Russian meddling in Mexico's election is no joke." Other outlets have chimed in: Univision, the Spanish-language media giant, has published an opinion piece; Bloomberg also gave Shannon O'Neil of the pro-war DC think tank Council on Foreign Relations an op-ed.

But if you're looking for more than an opinion, the facts speak for themselves: while bots and fake news did flood Mexican social media in the run-up to the election, Mexican officials cited by the New York Times on May 1 said they found no evidence of Russian interference and Russian officials have denied meddling.

The Times spoke with several researchers and analysts for the piece. "Some" concluded that if Russia were to interfere, they'd do it by trying to increase polarization in the race, and López Obrador would be the ideal conduit for it.

Only one of them claimed Russia had much of a hand in posts about Obrador, and the Times noted that they could not independently verifying his findings, which apparently showed about 63 percent of foreign-originated posts about López Obrador coming from Russia. For other candidates, only 4 percent came from Russia with the United States leading the way in meddling for those candidates.

The researcher admitted to being opposed to López Obrador. It should also be noted that the president-elect was also dragged by other opponents during the race over mystical ties to Venezuela and Cuba, Sputnik News reported on Friday.

"Other digital consultants," the Times noted, "found no such evidence of election-related social media activity from Russia."

About 20,000 pro-Nieto bots were created in the run-up to the 2012 race, the Times said, citing a Mexican web developer's research. Nieto's campaign hired a thousand people (read: trolls) to influence social media conversations about the candidate, according to his campaign's chief of marketing.

Sometimes, as 2012 demonstrated, disinformation comes from the internal exploitation of internal division.