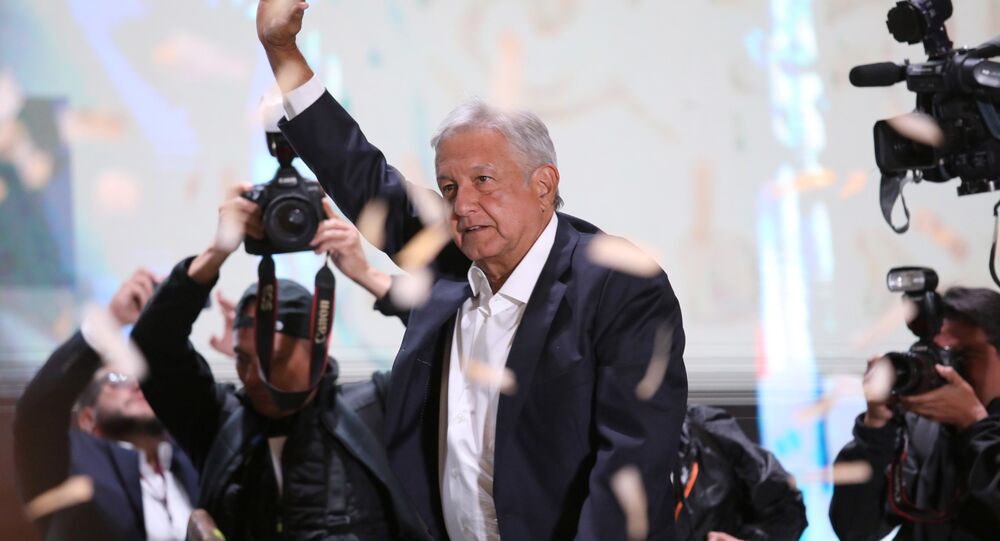 Many Mexican voters view Lopez Obrador as a harbinger of change amid growing security concerns and a looming trade war with the United States. The president-elect now faces several challenges, which may put the future of his initiatives at risk, including the possible US exit from NAFTA and violence in Mexico.

Leftist veteran politician Andres Manuel Lopez Obrador, 64, often nicknamed AMLO, has been elected president of Mexico, securing a victory with 53% of the vote.

The triumph comes against a background marred by internal and external threats to Mexico's well-being.

Lopez Obrador's victory wraps up one of the most blood-stained presidential campaigns in the country's history; over 130 candidates and political workers have been killed since its start in September 2017, including two political party members gunned down on election day.

On Sunday, the president-elect vowed to tackle the problems which underscore the violence, including poverty and corruption, in order to fight rampant crime. This seems like a tough challenge, as 2017 was the most murderous year in Mexico's history, with just under 30,000 homicides recorded. This is significantly higher than the figure for the US, despite Mexico having less than half the population of its northern neighbor and stricter gun laws.

"You can't fight fire with fire," Mexico's new leader has repeated. He had earlier adopted the slogan "abrazos, no balazos", ("guns, not bullets"). He added that he will seek a peace plan with representatives of the United Nations, as well as human rights and religious organizations, to help tackle the homicide rate.

The left-wing politician plans to make a U-turn in Mexico's security policy with his proposal to give amnesty to low-level figures involved with the illegal drug business. Lopez Obrador believes that a dialogue on the drug war is necessary as the use of force doesn't put an end to drug-related violence.

Saying No to Corruption

Lopez Obrador also promised to root out corruption, which he called the "result of a political regime in decay". AMLO claimed that it was corruption that gave rise to violence in the country.

"We are absolutely certain that this evil is the principle cause of social inequality and of economic inequality," he said.

The 64-year-old also promised to cut government personnel and salaries as well as cut his own presidential salary in half. His major task, he says, is bringing down the "mafia of power" he blames for looting the country.

Speaking to supporters after the unofficial results were announced, AMLO pledged that Mexico would attempt to pursue a friendly relationship with Washington based on mutual respect.

Another thing that Lopez Obrador will have to deal with is the construction of a border wall between the two countries. Lopez Obrador has authored a book titled "Oye Trump", or "Listen Up, Trump", in which he slams Donald Trump's plans to build a border wall and "his attempts to persecute migrant workers."

The wall construction adds up to the murky future of the 1994 NAFTA deal as the three economies have been caught in a trade spat. On Sunday, Canada hit US imports with $16.6 billion worth of tariffs in response to Washington's move to slap duties on Canadian metal imports.

Earlier this year, Washington threatened to scrap the agreement with Canada and Mexico, which removed trade barriers between the three nations, if there is no "fair deal". However, the NAFTA partners have some time to negotiate a revised agreement as Donald Trump noted on Sunday that he wanted to delay signing an updated version of the deal until after the midterm elections.

Will Obrador Win in Mexico?; Five Killed in Newspaper Shooting