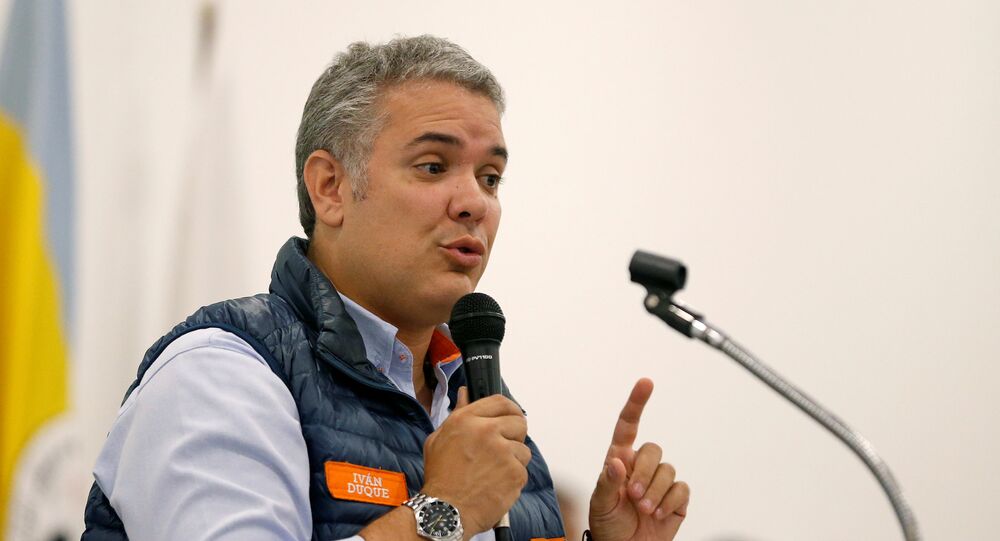 BOGOTA (Sputnik) – Colombian presidential candidate Ivan Duque said that he did not want to ruin the peace agreement with the Revolutionary Armed Forces of Colombia (FARC) signed by previous President Juan Manuel Santos.

“We do not want to ruin the peace agreements … [We must be] kind and generous with the insurgents, who have demobilized and disarmed,” Duque said.

Petro also expressed his willingness to remain committed to the peace treaty with FARC.

"The responsibility that we have today as a generation is not to let Colombia return to violence, to the authoritarianism of the 1886 Constitution. It is to deepen the 1991 Constitution, it is [to achieve] the definitive Peace, full Democracy," the leftist candidate wrote on his Twitter page.

© REUTERS / Nacho Doce
Nobody for President: No Colombian Candidate Wins in First Election Round
On Sunday, Colombia held the first round of the presidential election. According to the preliminary results, issued by the National Electoral Council, Duque from the right-wing Democratic Center party got about 40 percent of votes while his main opponent, left-wing candidate Gustavo Petro some 25 percent.

Both Duque and Petro are going to take part in the second round of the presidential election scheduled for June 17.

FARC was formed in 1964 as the military wing of Colombia's Communist Party. The half-century war between the FARC and the Colombian government claimed the lives of hundreds of thousands of people.

The Colombian government signed a peace deal with the FARC in November 2016.