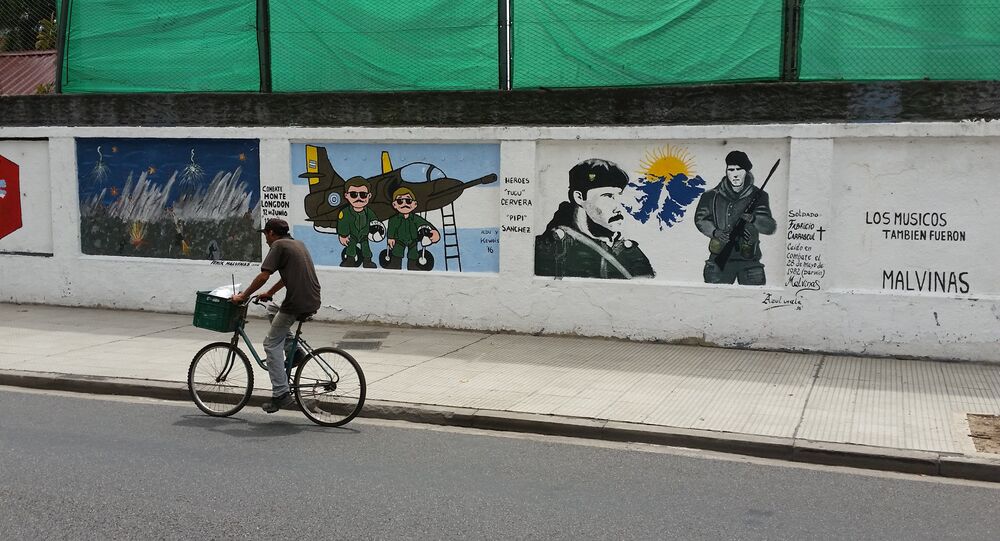 Gaffes Away! Will Boris Johnson Put His Foot In It During Trip to Argentina?

British Foreign Secretary Boris Johnson is in Argentina as part of a five-day trip to Latin America. Argentina's President Mauricio Macri is keen to improve relations 26 years after the two countries went to war over the Falkland Islands.

On Sunday, May 20, Johnson laid a wreath at the Monument of the Fallen Soldier in Buenos Aires.

During the 74-day conflict over the islands known as the Malvinas 255 British and 649 Argentine soldiers and sailors died.

Argentina's military junta, in a desperate bid to curry favor with the nation, invaded the archipelago in April 1982 but Britain sent a naval taskforce and won back the islands, sinking the General Belgrano in the process, with the loss of 323 crewmen.

An honour to join Foreign Minister Faurie today in Buenos Aires to lay a wreath at the Monument to the Fallen, commemorating all those who died on both sides of the Falklands conflict pic.twitter.com/GlP2H0Kwnk

Democracy was restored in the wake of the war but relations between the two countries have remained cool, especially during the reign of President Nestor Kirchner and his widow, Cristina, who inherited the presidency.

She built a Malvinas Museum in Buenos Aires and frequently laid claim to the islands but since his election in 2015 Macri has taken a far more conciliatory line.

Argentine security minister, Patricia Bullrich, a key ally of Macri, said they were "encountering very important ways of dialog with the UK" but she insisted Argentina still claims the islands, the majority of whose inhabitants are British.

"After so many years we hope that this also opens up the possibility of other important discussions for the Argentines, such as the recovery for our land in the Malvinas," said the Argentine security minister, Patricia Bullrich.

Johnson was accompanied at the ceremony by Argentina's Foreign Minister Jorge Faurie and on Tuesday, May 22, the British Foreign Secretary will visit the Casa Rosada for discussions with Macri, a pro-US conservative who has installed a program of austerity similar to that introduced in Britain under David Cameron and Theresa May.

Prince Charles — whose youngest son Harry got married on Saturday — stood before the same monument during a visit in 1999.

Johnson, who is prone to diplomatic gaffes and inappropriate comments, will be received on Tuesday by President Mauricio Macri at the Casa Rosada.

In 2016 the two governments put aside their differences in order to identify the remains of more than 100 fighters buried in a cemetery on the islands.

In March this year about 200 Argentinian families traveled to the islands for the first time to visit the graves of their loved ones.

Argentina's economy is in mortal danger and Macri has reportedly gone begging to the International Monetary Fund for US$30 billion in a bid to avert the financial crisis that hit Buenos Aires in 2001.

Macri is thought to be open to expanding trade with Britain and seeing if Johnson can exert any pressure on the IMF to release billions of dollars.

Johnson is on a five-day trip to Latin America and before arriving in Argentina he stopped off in Peru, where he gave an interview to political journalists where he touched on Brexit and made a veiled threat to Mrs. May.

"Brexiteers fearing betrayal over the customs backstop must understand that the prime minister has been very clear that neither option is an outcome we desire — we want a deal with the EU and she will deliver it," said Johnson, who supported Brexit during the 2016 referendum, as opposed to May and Cameron who both supported staying in the EU.

"I'm convinced that the prime minister will be true to her promises of a Brexit deal — that sees Britain come out of the customs union and single market, have borders as frictionless as possible, reject European Court of Justice interference, control immigration and free to conduct unhindered free trade deals across the world," he added.

"We must now give the prime minister time and space to negotiate this Brexit vision," said Johnson.

After Argentina, Johnson will fly on to Chile, which was a key ally of Britain during the Falklands War.

Chile and Argentina have long been regional rivals and the British Prime Minister Margaret Thatcher had a good relationship with General Augusto Pinochet, despite his appalling human rights record.