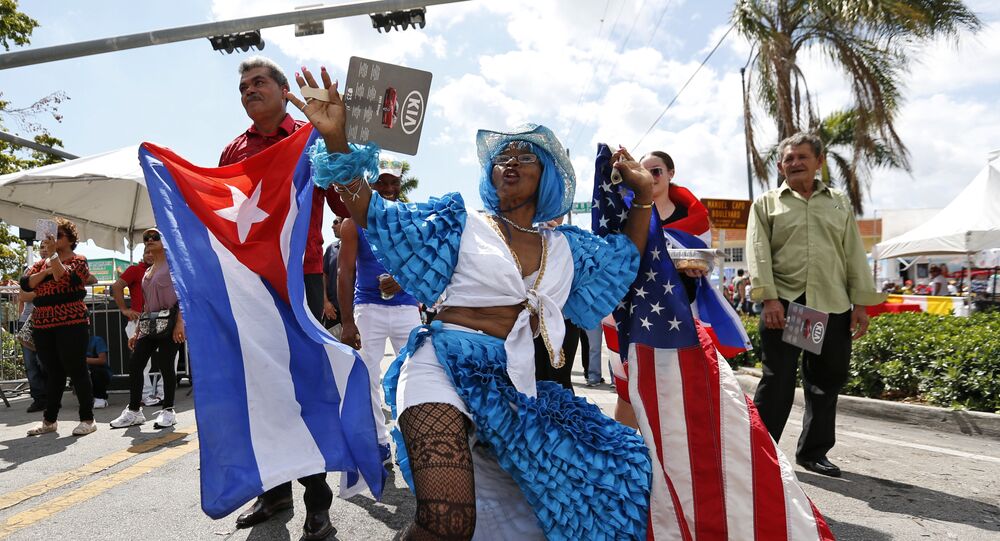 There is a widespread opinion in Cuba that the country’s future can be decided only by its residents, with some claiming that it is indispensable to live in the Cuban reality to have a say, however, the diaspora living outside the country is also willing to take part in Cuba’s future.

Sputnik Mundo has found out what the expectations from the new Cuban government are among those who left the country long time ago, and it appears that migration is at the core of heated debates outside Cuba.

In October 2017, Cuban Foreign Minister Bruno Rodríguez Parrilla held a meeting with immigrants and announced that those who had left the country illegally would get a chance to return home, provided they hadn’t left the island through the base in Guantanamo Bay. Earlier, the Cuban government revoked the need to receive permission to leave the country and to invite citizens living on the island; it raised the time limit of staying abroad from 11 to 24 months and annulled a ruling that allowed it to seize the property of those leaving the country.

Although migration policy has significantly changed over past decade, it is still a cornerstone in relations between the government and the diaspora.

Cubans living abroad are bound to renew their passports every two years before their trip to the island, which requires requesting the registration directly at the consulate. This requirement is only relevant for traveling to travel to Cuba, as it is necessary that the passport be valid for at least six years to visit other countries, therefore, many demand that the term be extended up to 10 years. Any procedure requires a personal presence at the consulate, which means that those who regularly visit Cuba need to extend the document every 24 months.

It appears that any services and operations related to passports are more expensive for those living abroad than for residents of the island. For instance, people living in Miami will have to travel to Washington or turn to agencies acting as mediators, which will cost them $350. As for Europe, they will have to pay some $180, for other countries it will be $200.

In Cuba, citizens pay less than $100 upon receiving their documents, and extensions usually come at $20 – this sum, however, exceeds the average salary of Cubans threefold. In order to extend their passport in the US, Cubans will have to pay $160, in Europe it will cost them $90, and in

© AFP 2020 / GUILLERMO ARIAS
Trump Ends US' 'Dangerous' 'Catch and Release' Immigration Policy
A family of three, living abroad, is forced to spend thousands of dollars to purchase plane tickets, to start the procedure of passport renewal and thus reserve their rights. Many Cubans have been calling for canceling the restrictions on staying abroad, which, according to them, violates their rights as citizens of Cuba and to restore those rights during repatriation.

Under this process, they receive an ID, while property rights, the right to work and do business in the country are restored. In order to start the repatriation process, a Cuban needs to arrive in the country, go to a notary together with a relative that can register the person at his/her house, so that this information can then be transferred to the migration service. The entire procedure takes up to five months and requires spending some $100