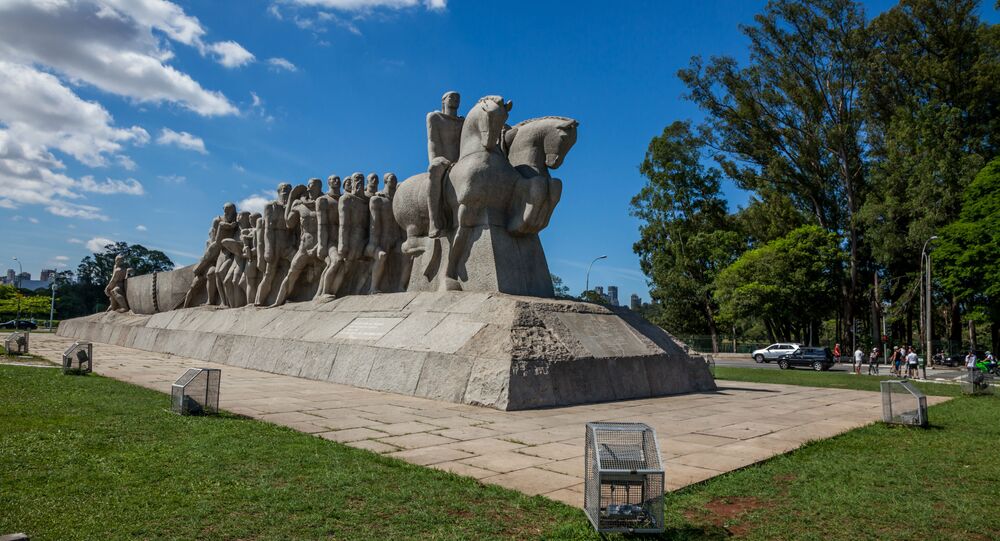 Despite the Constitution of Brazil saying “ the Federative Republic of Brazil is an indissoluble union of states, municipalities and a Federal District,” secession movements seeking independent breakaway states continue to rise.

One of the best known movements is Sao Paulo Livre, established October 24, 2014, two days before the second round of presidential elections in which Dilma Rousseff was re-elected to second term. The movement aims to create an independent "Republic of Sao Paulo."

© AP Photo / Andre Penner
Brazil Police Postpone Lula’s Arrest Until At Least Saturday
Sputnik Brazil contacted the founder of the movement, professor and journalist Flavio Rebello, and asked what motivates his demand to separate the state of Sao Paulo from the rest of the country.

According to Rebello, there is no such thing as "Brazilian identity."

"There is no such thing as simply ‘Brazilian.' There are citizens of Rio de Janeiro state, Sao Paulo state, Minas Gerais, there are people of the north and of the south… It so happened that we become Brazilians on two occasions only: two to three months before presidential elections and during the World Cup championship. At any other time we are people of Rio de Janeiro, Sao Paulo, simply because Brazilian culture actually does not exist," he explained.

The movement's website includes a name for the republic's currency, too: "Ouro Paulista," or "golden Paulista."

"The golden will have real purchasing power, a stable exchange rate — in other words, it will not lose its value like the [Brazilian] real before more powerful and stable currencies like the dollar or euro," the Sao Paulo Livre website reads.

Besides new currency, the movement plans to charge a fee for new members in Brazilian reals. "New separatists" who want to join Sao Paulo Livre must pay a one-time 90-real fee (roughly $27) or 120 reals ($38), spread in 12 monthly payments.

© AFP 2020 / FRANCK FIFE
Expert Explains What's Really Happening to Brazil's Lula Da Silva
This necessity is explained, according to the movement's founders, by the need to cover the costs of making brochures and flags, as well as and rally expenses. It is impossible to determine the exact sum raised by the movement or understand how exactly the money is distributed, because the movement does not publish its revenues on its website.

However, Alberto Rollo, an attorney and a teacher of Constitutional Law at Mackenzie Presbyterian University in Sao Paulo, explained that the separation of any Brazilian territory violates the Brazilian constitution.

"In terms of law, this is impossible, if we speak about the separation of some Brazilian territory, it is impossible within the framework of the constitution," he says.

Rebello, on the other hand, points out that the movement seeks to change the constitution so that it includes a separation amendment.

"No metropole includes separation of a colony or, probably, part of its own territory, in its law system. Portuguese laws did not allow Brazil to separate, but it did. England had no legal condition for separation of Canada, Australia and South Africa," he says. "What we want is to have a legal right to vote, whether we actually want to be a part of a federation or an independent country."

Rebello added that current number of Sao Paulo Livre members is 26,000 people and this number grows every year.

"The fact that there are few of us is relative. You should rather look at our growth speed instead," the founder says.

© Photo : Youtube/AstralBert
‘Devil Doll’ Found at Cemetery in Brazil
He added that in the last few years, the expansion speed was 5,200 percent — somewhat less impressive when you consider that at its founding the movement included only three people.

According to Rollo, such growth might be connected with general disappointment in traditional politics among the population in the country.

"This is disappointment in politics, in politicians; but I prefer to think that the solution is, instead of calling a constituent assembly, it is better, since we have elections in few months, to change our entire congress, entire executive power, all governors, all senators," he says.

"We already have this power, this power is in our hands and it happens through voting. It would be much easier to change everything in October [when Brazil holds elections], than to think about a constituent assembly and about the separation of territory," Rollo concluded.

Even if the separation of Sao Paulo is difficult to imagine right now, US President Donald Trump's electoral victory and the UK's Brexit vote have taught us an important lesson: nothing, however improbable, should be dismissed as impossible in politics.