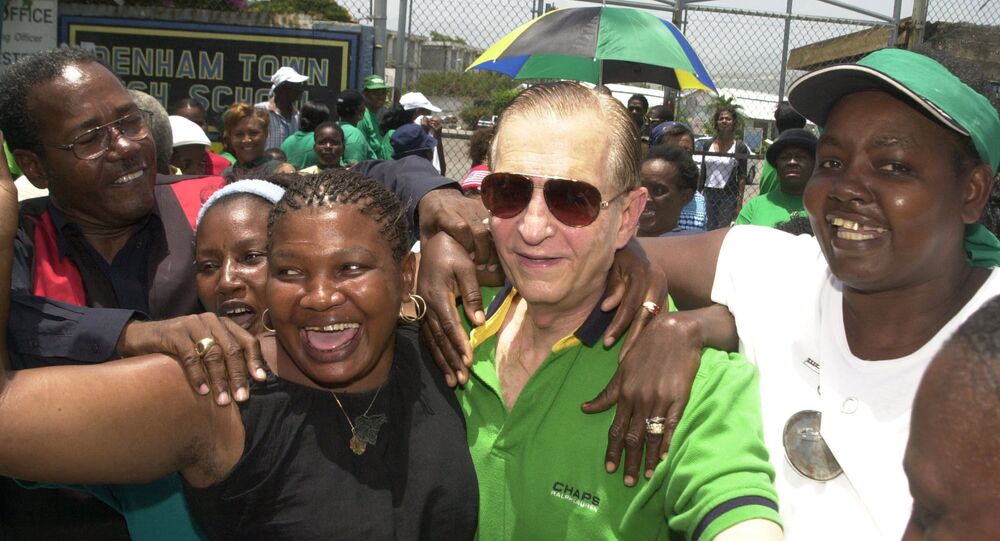 No Left Turn: Jamaica Names Highway After Ex-PM but News Does Not Go Down Well

Jamaica's ruling party has announced plans to name a brand new Chinese-built motorway on the island after controversial former prime minister Edward Seaga. So what are the rules of naming roads, buildings and airports after politicians and why has there not yet been a Margaret Thatcher Street in Britain?

Ironically Seaga had opposed the building of the North-South Highway, running from Montego Bay on the north coast, which is popular with tourists, with the capital, Kingston.

But on Thursday, March 22, the current Prime Minister of Jamaica, Andrew Holness, formally announced the four-lane highway — built by the China Harbour Engineering Company — would be named in honor of Seaga, who is now 87.

Seaga was born in the US, of Lebanese parents, and was heavily backed by the White House and the CIA during his tenure as prime minister from 1980 until 1989.

Edward Seaga getting a highway named after him is the funniest thing. Hypocritical at its finest.

His Jamaica Labour Party (JLP) was a conservative, pro-American force and his arch-enemy was Michael Manley, leader of the left-wing People's National Party (PNP), who flirted with Fidel Castro's Cuba during his reign as prime minister in the 1970s.

During the 1976 gangsters in Jamaica's ghettos who pledged allegiance to either the JLP or the PNP declared war on each other, claiming hundreds of lives.

In 1978 Jamaican reggae superstar Bob Marley persuaded Manley and Seaga to come on stage and shake hands during his One Love peace concert.

But sadly, at the 1980 election, violence broke out again between JLP and PNP gunmen.

Neither here nor there to me.. as long as the drive is nice & smooth!

Manley died in 1997 and he only has a boulevard in Kingston named after him while Jamaica's main airport, Norman Manley International, is named after his father, who founded the PNP and campaigned for Jamaica to be part of a Federation of the West Indies.

Last night at the Rededication Ceremony of The Bustamante Museum, I made an announcement that the North-South Highway will be renamed in honour of The Most Hon Edward Seaga. pic.twitter.com/Wb546t1jux

But perhaps Michael Manley should consider himself lucky to have a boulevard named after him because Margaret Thatcher, who was British prime minister from 1979 until 1990, has not had a single road or building named after her, let alone an airport, since her death in 2013.

Not in the UK anyway.

In Madrid there is a Plaza Margaret Thatcher, although the Spanish capital's mayor has threatened to rename it.

This was Edward Seaga view about Highways, and now we naming it after him?? Fe wha??? Honour past PMs yes, but whey de whole heap a dis fah? Including things he didn't even believe in. Why not Edward Seaga Gardens instead of Tivoli? pic.twitter.com/puJTpeLnjE

​In Britain motorways are traditionally only given numbers like the M1 and M25 while roads, airports and ships are usually named after Royalty, like HMS Queen Elizabeth and HMS Prince of Wales.

It is rare to name things in Britain after politicians but one exception is Winston Churchill who, although a Conservative, is revered as the country's wartime leader.

Thatcher was a very polarizing figure who was equally loved and hated by different parts of the political spectrum. Some left-wingers held parties to celebrate her death

Plenty of Honors for US Presidents

But other divisive figures have had roads and buildings named after them.

Former US President Ronald Reagan had an airport named after him in 1998, six years before his death.

People are not just opposed to a road being named after former PM Most Hon. Edward Seaga, after all he did serve the country. People are opposed to naming a road that he disagreed with its construction.

Ironically Ronald Reagan Airport near Washington DC only serves destinations within the US while the capital's international airport is named after a man who would have been outranked by Reagan, former Secretary of State John Foster Dulles.

The main airport in New York is named after President John F Kennedy, who was assassinated in 1963.

Someone said instead of naming the high way after Edward Seaga we should call it CIA high way. I peed 😭😂👀😂😂😂

One of the oddest naming decisions happened in November last year.

It would be more appropriate and honorable to recognize former Prime Minister #EdwardSeaga by attaching his name to an institution that reflects his legacy and contribution to #Jamaica.

Twelve days later Mugabe, who had been Zimbabwe's leader since 1980, was finally forced from office after what was effectively a military coup.

There are currently no plans to remove his name from the airport.

UK to Spend $38 Mln on Building Prison in Jamaica – Cameron