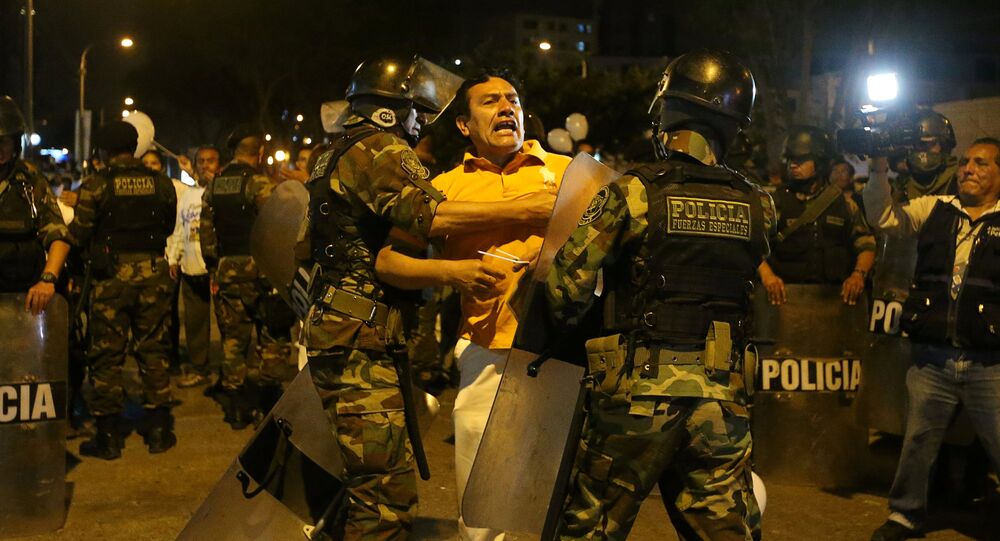 Police in Lima have clashed with protesters who took to the streets of the Peruvian capital enraged by a presidential pardon for ex-leader Alberto Fujimori, which many see as a backroom deal to protect the current president from impeachment on corruption charges.

On Sunday, President Pedro Pablo Kuczynski granted a “medical pardon” to the country’s former strongman Fujimori who is serving a 25-year jail sentence for human rights abuses, corruption and the sanctioning of death squads, responsible for killing civilians during his 1990-2000 rule.

President Kuczynski said he understood the feelings of those protesting against his decision to release Fujimori, but added that he could not "allow Alberto Fujimori to die in prison."

The controversial pardon is seen by critics as a payback after Fujimori’s son, Kenji Fujimori, was among several lawmakers who abstained from last week's vote to remove Kuczynski from office for allegedly receiving illegal payments from the Brazilian construction giant Odebrecht.

Kuczynski denies any behind-the-scenes politicking for his decision to pardon Fujimori.

Peruvians remain bitterly divided over Fujimori’s legacy. He is admired by some Peruvians for combating Maoist rebels and reviving the country’s hyperinflation-stricken economy, while his critics brand him a corrupt dictator.

"Instead of reaffirming that in a state of law there is no special treatment for anyone, the idea that his liberation was a vulgar political negotiation in exchange for Pedro Pablo Kuczynski maintaining power will remain forever," Jose Miguel Vivanco, executive director of Human Rights Watch in the Americas, tweeted on Monday.

Alberto Fujimori was ousted by the Congress in 2000 after fleeing to Japan and was later convicted by a court of embezzlement.

He was also found guilty of ordering the extrajudicial killings of 25 people, including an 8-year-old boy, in the early 1990s by a paramilitary death squad targeting suspected rebel supporters and leftist activists.